In what was supposed to be a moment of celebration quickly turned upside down as not only Jakarta, but the whole country, honed in on the Governor’s speech, namely with his use of the word “pribumi”.

His first day in office was likely not an enjoyable one.

In his speech Anies said, “We ‘pribumi’ were oppressed [by the Dutch Colonialists]. Now it’s time for us to be the hosts in our own land”.

Pribumi is a Dutch word meaning “inlander”, used to label Indonesians “from the land”, the “indigenous”, i.e. those of Malay/Austronesian ethnicity.

It was a derogatory term back in colonial times, as pribumi were seen as third-rate citizens, below European colonialists and “other foreigners” such as the Chinese, Indians and Arabs that settled in Indonesia mainly for trade. After independence its use continued, transformed into a word of pride, a nationalist sentiment that gave a sense of belonging and ownership to the land beneath our feet.

With this however, it is only natural for racial discrimination to arise. With pribumi you will therefore have your opposite; non-pribumi. What is then created is a dichotomy, an “us” and “them” dynamic based on race.

It is this very rhetoric that Governor Baswedan seemed to want to emphasise during his speech, which with his constant reference to Dutch Colonialism, national independence and the use of ‘pribumi’ seemed more appropriate for the 1945 Declaration itself. Not entirely appropriate for a governor’s speech 70 plus years later…

One Twitter user likened Baswedan’s overtly nationalistic language with racist undertones, to that of President Trump’s inauguration, seeing parallels between “America First” and “Pribumi First”. Another Twitter user was reminded of the horrors of 1998, remembering the trauma, discrimination and violence against Indonesians of Chinese-descent.

It comes as no surprise; his dialogue was deliberate, matching the same tone and sentiment of his election campaign which many recognised as being anti-Chinese and anti-non-Muslim. An effective strategy to gain popularity in his race against then Governor Ahok, a Chinese-Christian Indonesian. Some have argued that the use of the word was a direct dig against his now jailed predecessor and election opponent.

Real caution needs to be brought up on the fact this word was used by a member of the government though; the problem with saying ‘pribumi’ and recognising it publicly is that this ‘legitimises’ the word. Baswedan has now brought this type of dialogue into the public sphere, which has the potential effect of creating psychological divides and rifts between races, religions and cultures. Whatever his reasons were for using it, Anies Baswedan has formally reintroduced the “us” and “them” mentality back into Indonesia society.

Now, this is no exaggeration.

In fact, the risks of using these words was recognized by President Habibie back in 1998 after the riots that saw people raped and murdered based on racial and religious differences. He banned the use of both “pribumi” and “non-pribumi” in all political communication back in September 1998 in an official Presidential instruction. Habibie understood the power language has on a society.

Whilst Governor Baswedan may see a political advantage in socially divisive strategies, sadly he may not have thought fully on the effects they may have in the country. Boiling the pot of racial and religious hatred for political advantage is playing with fire – a fire that just may cause the pot to boil and bubble over… 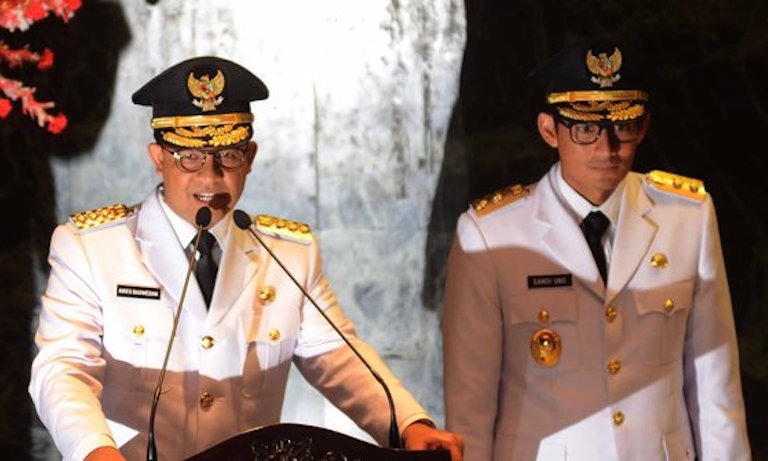 Let us just hope that this incident is not one of many to come; if indeed he continues to use this kind of suggestive, divisive rhetoric, we can realistically see Indonesia moving toward similar societal clashes that both the US and the UK have recently experienced (from Trump and Brexit respectively). Knowing Indonesia’s violent past (1965, 1998), this would not bode well.

The light at the end of the tunnel however, is the Indonesian public. Over 92,800 tweets followed the inauguration speech under the hashtag #pribumi, many voicing their real concerns over its use and the new Governor’s irresponsibility. Whilst Indonesia’s squabbling politicians try to play their games, it’s comforting to know that the rest of the country can remember Indonesia’s motto: