Indonesia produces more marine plastic pollution than any other country after China.

Our relationship with the way we treat single-use plastics goes back thousands of years. It’s best illustrated by the use of banana leaves as plates and the and how freely and carelessly we could dispose of the biodegradable material.

Now single-use plastics have replaced the natural stuff we once used and, combined with rudimentary waste management, millions of tonnes of trash end up in waterways, then the ocean.

As part of the UN Clean Seas campaign, Indonesia pledged US$1 billion to cut its marine waste by 70% by 2025.

But if we have any chance, we need to:

Big Industry needs to move away from single-use plastics

Enter the magical substance of seaweed. 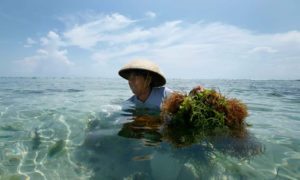 Indonesia’s seaweed production is second only to China and is increasing by an estimated 30% a year. Indonesia is also the world’s biggest producer of red seaweed, a variety that’s ideal for creating bio-plastics and packaging. 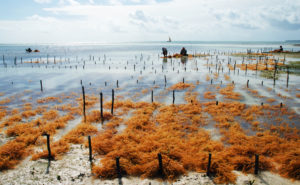 Currently, most bio-plastics comes from land and sources related to the food industry, including corn, sugarcane, and cassava. However, according to Bakti Berlyanto Sedayu, a researcher with the Indonesian Ministry of Marine Affairs and Fisheries, seaweed is a far more sustainable alternative.

Sedayu says that land-based bio-plastics require huge investments in land, that could risk accelerating Indonesia’s deforestation rates, which are the highest in the world. 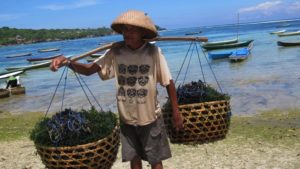 They also use fertilizers and pesticides and are not always as biodegradable as they’re touted to be.

By contrast, seaweed is cheap to produce as it is cultivated offshore, grows quickly and doesn’t require fresh water or chemicals to grow successfully. Seaweed beds are also natural carbon sinks, de-acidifying water.

It also has the added benefit of capturing carbon from the atmosphere, as Tim Flannery explains in his book Sunlight and Seaweed.

Conditions in Indonesia are ideal for seaweed farming. The sun shines more or less all year round and there are more than 34,000 miles of coastline. The industry is already there and growing, particularly as pressure on fisheries continue, coastal populations see aquaculture as a safe alternative. 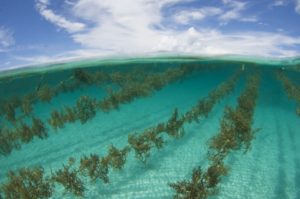 Sedayu believes it could take just five to ten years to bring the production of bio-plastics up to an industrial scale.

At the moment, it’s still early days for seaweed-based packaging.

Indonesian startup Evoware is producing seaweed products that are edible. According to founder and CEO David Christian:

“We’re expecting to be fully automated by next year. When that happens, our edible packaging will cost around 30% more than existing plastics, which is competitive.” 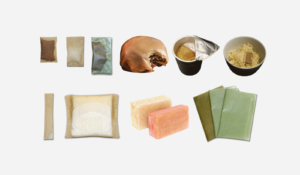 Evoware also works directly with seaweed growers. Right now, 80% of seaweed is processed outside Indonesia and the lengthy supply chains mean that farmers see a small fraction of the profit.

Evoware teaches them how to grow quality seaweed, and pays local growers double.

We will all have to change our practices, from company to consumer, if we are going to have seaweed based packaging and bio-plastics replace single-use plastics.

But make no mistake – this must happen if we are to avoid a climate catastrophe.

The comforting thing to take away is that the solutions are not impossible, and very much lie within the capability of the human race.

We just have to be bothered and unified enough to save the world.