The Volcano Gods along the Ring of Fire must be angry.

Mt. Agung has erupted again. It’s the second time in 8 months and has lead to Bali’s Ngurah Rai airport being closed.

Thankfully though, according to official airport press release, the airport has reopened. 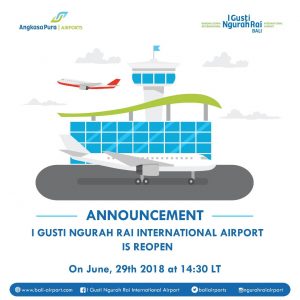 A thick cloud of smoke could be seen billowing out 2,000 meters in the air, which prompted an initial closure of the airport from 3 am to 7 pm Friday following a pilot reporting volcanic ash as high as 23,000 feet on Thursday night.

“Based on the meteorology agency prediction, the volcanic ash will reach the airport on Friday morning.”

It was suggested that a possible extension of the airport closure beyond 7 pm Friday would be reviewed.

Ash is dangerous for planes as it makes runways slippery and can be sucked into their engines.

Despite the eruption, the volcano’s status has not been raised by Indonesia’s volcanology agency and remained at alert level, while the Volcano Observatory Notice For Aviation has issued an orange level warning.

Mount Agung rumbled back to life last year and has been erupting periodically since. It’s November eruption reportedly cost hundreds of millions of dollars in revenue for the tourist haven.

There is a four-kilometer no-go zone around Agung’s peak with thousands of Balinese refugees who are still unable to return to their homes.

Indonesia is the world’s most active volcanic region and lies on the Pacific “Ring of Fire” where tectonic plates collide, causing frequent volcanic and seismic activities.

Though this eruption seems to have been relatively undisruptive, one question is on everybody’s lips…

Is it only a matter of time before we experience a “Big One”?