Aceh, on the northern tip of Sumatra, is no stranger to conflict, tragedy and receiving aid.

The 2004 Tsunami claimed the lives of over 150,000 people, and the global community’s generosity helped rebuild the province. The trauma also helped fuel the adoption of Sharia Law that has now semi-vilified the region across the world.

Though it is this very understanding of victimhood, as well as being part of the Islamic family, that has seen the residents of Aceh accept Rohingya’s refugees with open arms.

700,000 Rohingya now live in Refugee camps in Bangladesh, running from genocide experienced in Myanmar. They have been called the most friendless people on earth.

But when 79 Rohingya refugees left Myanmar’s Rakhine state last month, terrified, they were welcomed by a sense of fellowship. As they were on route to Malaysia, where families and jobs awaited, they were redirected by Thailand’s navy. 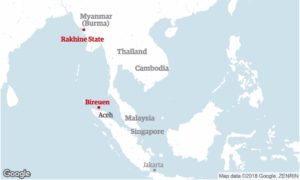 Then, just after Friday prayers a few weeks before Ramadan, they landed in Bireuen, Aceh Province. Bireuen’s population of 40,000 welcomed them like family.

Mohammad Shobir, a Rohingya man who came with his wife, has said:

“They are taking care of us like parents take care of their children. We were very scared when we landed, but these people have given us everything: food, medicine, shelter… we want to express our sincere gratitude to them.” 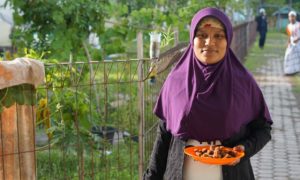 They will stay in a refugee camp until after Ramadan, when they will find more permanent shelter in the city of Langsa.

Boats turned away from Thailand and Malaysia (Malaysia is already home to 150,000 Rohingya who aren’t allowed to work), often find their way to Aceh. Generous donations followed the first nine vessels that sank in 2015 when Acehnese fishing boats heroically went out to save them.

At least 1,740 Rohingya have landed in Aceh over the last 10 years. 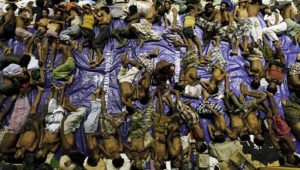 And the help keeps coming:

There’s a health clinic and one large room devoted to donations, which include towers of Indo Mie boxes (naturally), egg crates, cooking oil and piles of clothes. The refugees also wear donated hijabs and sarongs, while the men have white pecis which were donated by local mosques and charities. 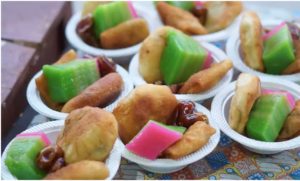 Young Acehnese are volunteering out of a sense of duty, saying various things like:

“Because they are our Muslim brothers”

“Because my soul felt called to do it”

“Because it’s our duty as Acehnese”

Saw Myint from the office of the United Nations high commissioner for refugees in Bangkok has visited the camp, saying that the help provided has been “unique” in the region:

“The refugees cry when expressing their gratitude. The Achehnese are very pious, humble, helpful.” 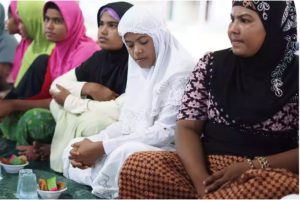 All this happens while Indonesia has failed to officially recognise refugees and is not a signatory to the 1945 UN convention.

Still, there are tragic stories of lost family members and horrendous atrocities. At the very least, these Rohingya are being looked after.

While Aceh is becoming home to the “most friendless people in the world.”