Last week, it was confirmed that the figurative artworks discovered in the Luban Jeriah Saleh caves of East Kalimantan are the oldest in the world.

The paintings are between 40,000-52,000 years-old. But the mysterious tribe and their artists remain lost to history.

Though their art lives on.

This discovery is in conjunction with another discovery of hundreds of caves in the Moras region of Sulawesi that also have examples of detailed art at least 39,000 years-old.

But the implications of these paintings are immense… 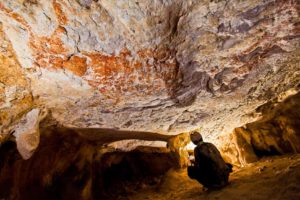 The history of cave art discovery is fascinating and continues to develop with new findings.

It was originally thought that Europe was the birthplace of figurative art, and thus, the first examples of abstract human thought. 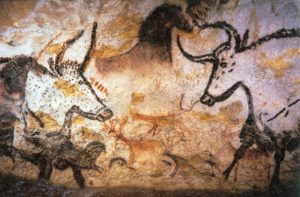 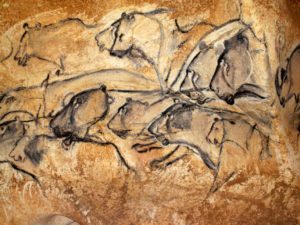 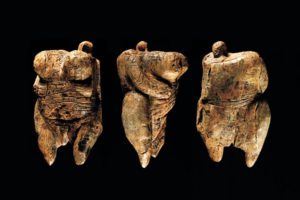 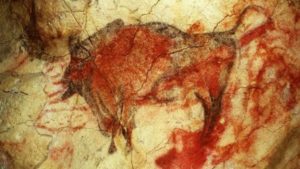 Although we are physically and cognitively identical to our Home Sapien ancestors of 70,000+ years ago, there is a quantum leap in the imagination of lined art and figurative art.

It is now thought that our creative capacity existed when our ancestors left Africa for Europe and Asia.

But the explosion of figurative art across the globe, around 40,000 years ago, is nonetheless intriguing and yet unexplained…

The Kalimantan Cave Art was first spotted by the French explorer Luc-Henri Fage in 1994. 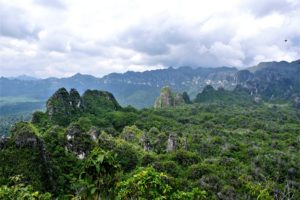 Dating cave art can be difficult. Carbon-dating can be unreliable with paintings this old.

Relatively recently, a technique called Uranium Series Analysis has been developed. It has allowed archeologist Dr. Aubert and his colleagues to date the age of the flowstone that covered the paintings.

Here’s what they found… 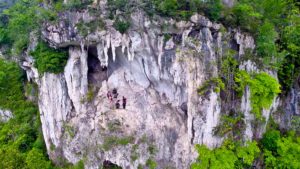 There are distinct ages separating the paintings:

By blowing Ochre paint from the mouth onto a hand, ancient people were able to leave the first artistic expressions. 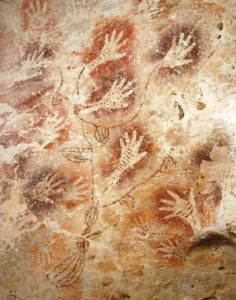 Archeologists suggest this is most likely a Banteng, a local buffalo species still present in Kalimantan. 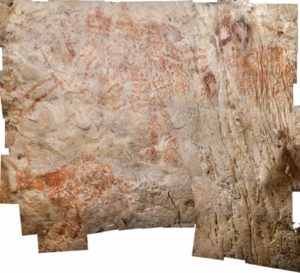 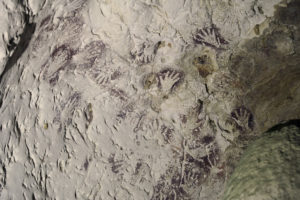 The hand stencils are common motifs globally. It’s almost like they were saying: 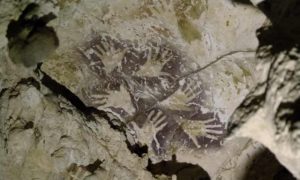 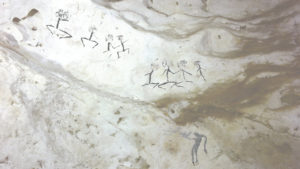 The headgear denotes a cultural advancement, perhaps even religious and shamanic practices.

Paintings of boats also suggest the people of the Kalimantan caves had become an advanced seafaring culture.

Particularly when we consider the Moras Cave Art on the island of Sulawesi – painted 20,000 years before… 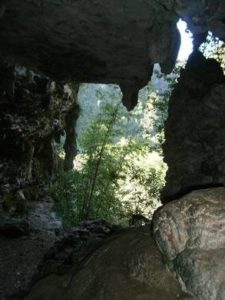 Indonesia has thousands of examples of Limestone Cave Art.

In the Moras Caves in Sulawesi, hundreds have survived.

Dr. Aubert and his colleagues also collected 19 samples taken from the edges of 14 works of art across seven cave sites in 2014. 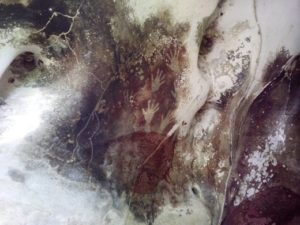 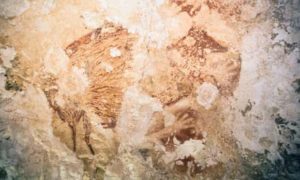 These were the oldest paintings in South East Asia, until the Kalimantan Cave Art.

Interestingly, the oldest paintings in Kalimantan and Sulawesi are separated by 4,500 years. To put that in context, that is the same separation in time as the supposed building of the Great Pyramid and Us in 2018!

Indeed, the huge separation in time suggests that there could have been countless generations separating the Cave Artists Work in the same locations.

But what is interesting is that the Ancient Artists of Sulawesi must have been seafaring tribes to get to the island in the first place.

Did The Ancestral Tribes Of The Kalimantan And Moras Caves Know Each Other?

Did They Descend From The Same Tribe?

For a seafaring culture, they aren’t a million miles away. 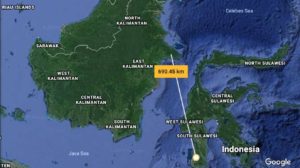 Unfortunately, there is no evidence of the mysterious communities who immortalized their presence through their cave art.

For every curious person on earth, please, get digging Dr. Aubert…