Scientists provided evidence of the purpose and construction of Gunung Padang at the American Geophysical Union in Washington on 12th December.

It’s not usual that the mainstream scientific and archaeological community pay attention to the Pyramid Structure waiting to be unearthed in West Java.

This established international platform for the history-changing findings of Gunung Padang represent an important milestone in gaining support for further investigation.

“What is previously seen as just surface building, it’s going down — and it’s a huge structure.”

Though the buried structure may superficially resemble a pyramid, it differs from similar pyramids built by the Mayans.

While Mayan pyramids tend to be symmetrical, this structure is elongated, with what appears to be a half-circle in the front.

Natawidjaja and his colleagues suspected that the exposed megalith might be more than it appeared, because some partly exposed features in the existing archaeological site didn’t quite match the standing stones. The “peculiar” shape of the hill also stood out from the landscape.

“It’s not like the surrounding topography, which is very much eroded. This looks very young. It looked artificial to us.”

Indeed, there is now no doubt that we are dealing with a man made structure at the Gunung Padang Megalithic site.

That should be enough to excavate the greatest ancient structure discovered in Indonesia since Borobudur.

Natawidjaja team used an array of techniques to peer underground.

The scientists reported at AGUA that the very top were pillars of basalt rocks framing step terraces, with other arrangements of rock columns “forming walls, paths and spaces”. They estimated this layer to be about 3,000 to 3,500 years old.

Underneath the surface, to a depth of about 3m is a second layer of similar rock columns, thought to be 7,500 to 8,300 years old.

And a third layer, extending 15m below the surface is more than 9,000 years old… it could even date to 28,000 years ago, according to the researchers. 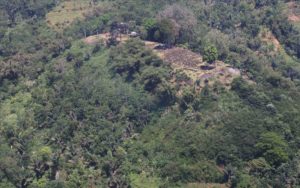 Even today, local people still use the exposed site at the precipice as a sacred place for prayer and meditation.

Natawidjaja confirms this was probably also the purpose of the Megalithic site for one of history’s first Civilizations.

Investigating The Implications Of Indonesia’s 40,000 Year-Old Art Being The World’s Oldest
Indonesia In The 70s – Fascinating Photographs Capturing Everyday Indonesian Life In 1975 (Part 1)