This is the reaction I get from most Indonesians when I tell them where I went a couple of weekends ago. “But there’s nothing to do there! Besides eat street food.” 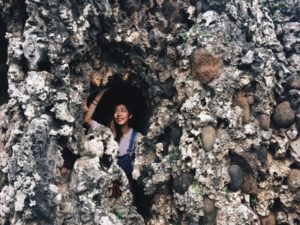 Cirebon, a city in West Java, possesses a rich history of trade, multiculturalism, and royalty. About 3 hours away from Jakarta by train, it is an accessible and often overlooked day trip that could easily be done without having to book accommodation.

Arrive in the morning, leave before the sun sets. Easy.

At a bright hour of about 7AM, we departed for Cirebon from Jakarta’s Gambir Station. The ride was pretty painless; seats were comfortable and it was easy to fall asleep. For the insomniacs out there, the view from the window was also quite nice as the city gradually transitioned to clusters of low houses and rice paddy fields. 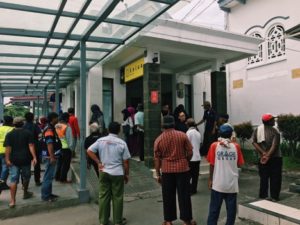 At Cirebon Station, we were greeted by many a hustling taxi driver looking to pick up passengers. It can be quite the overwhelming sight. Not wanting to negotiate for a fare, I booked a Grab car. This caused the hustling taxi drivers to get quite angry (they operate in taxi cartels), but if you walk far enough from the station it should not be a problem. 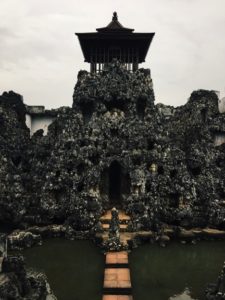 Our first stop was Sunyaragi Cave.

The attraction is actually a man-made water palace made of stone. Built in 1703 by a Cirebon sultan for the purpose of relaxing with his harem, it is a series of twisting and narrow corridors and rooms arranged in a rather logic-defying manner. You could easily spend an hour here taking photos and getting lost. 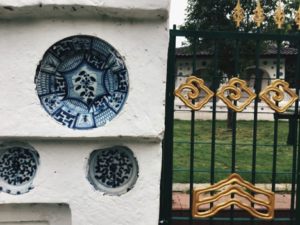 While in Cirebon, you can’t not visit the various keraton, or palaces, in the city center. Walking distance from the train station, the two main keraton – Keraton Kasepuhan and Keraton Kanoman – are well-embedded in the neighbourhoods that have grown around them. Children can be seen running throughout the courtyards, and entire housing complexes are built around some of the ancient grounds. It is hard to resist weaving through the narrow alleyways and marvelling at the almost natural and obvious way that people have built their lives on top of these once-royal grounds. 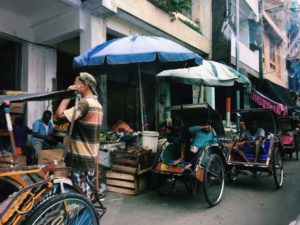 The heartbeat of the city seemingly resides in one narrow strip of road that serves as a local marketplace for all your kitchen needs. Men and women alike hawk their produce, while colourful tuk-tuk drivers wait to pick up passengers. The whole scene could only be described as “sensory overload,” but in the best way possible.

You’re probably wondering about the whole “culinary gem” aspect now. I can tell you for a fact that this is an accurate title. The first must-try item is empal: it’s essentially a beef dish where the beef is stewed in a particular type of soup. There is empal gentong, which is coconut milk-based and empal asem, which comes in a clearer and more intensely-flavored broth. Served with a side of rice, it is a delicious meal to enjoy on a colder day. 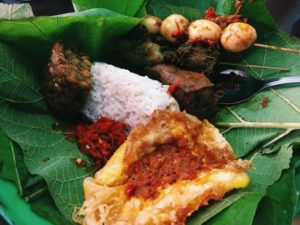 Next we have nasi jamblang, which is _. On the recommendation of a friend, we checked out Nasi Jamblang Mang Dul. You essentially pick whatever you want in your rice and pay at the end. Kind of like nasi padang style, except the food is much less spicy and sweeter. I scooped up some tempeh, tofu, quail egg, and stewed potato. Yep, made it veggie and it still filled me up to the brim. 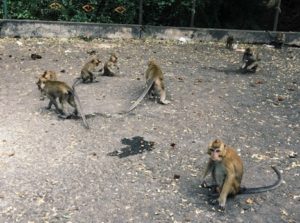 Finally, if you’re in want of some nature, there is the Plangon Monkey Forest.

Located on a hill, it is a short but winding path up to a quiet, tree-filled area. Not so much to see, but it provides a breath of fresh air and quiet after being in the bustling city areas. Plus, there are wild monkeys roaming around. You could buy peanuts from the vendors in the parking area, but I preferred to watch from a distance. Monkeys are known to snatch your things when you least expect them to, after all! 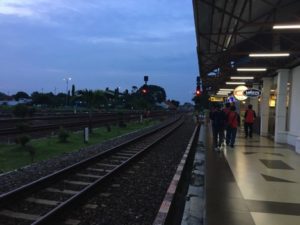 And that concludes my day trip to Cirebon! A random, spur-of-the-moment, book-the-day-before trip, it was a pleasant and non-touristy break from Jakarta. If you have a day to spare, give Cirebon a chance.

And definitely eat all the nasi jamblang you can get your hands on.

Meredith is an all-around New Yorker based in Jakarta, Indonesia.

Are you a blogger with a flair for writing?

Contact us as part of the “Write for WowShack Series”