Connect with us
Photo: independent.ng

The world’s largest bee has been rediscovered in Indonesia, scientists said on Thursday as they released images of the insect.

Wallace’s Giant Bee hasn’t been seen in decades. Named after Alfred Russell Wallace, who discovered the behemoth species in Indonesia, the black creature was last seen in 1981. 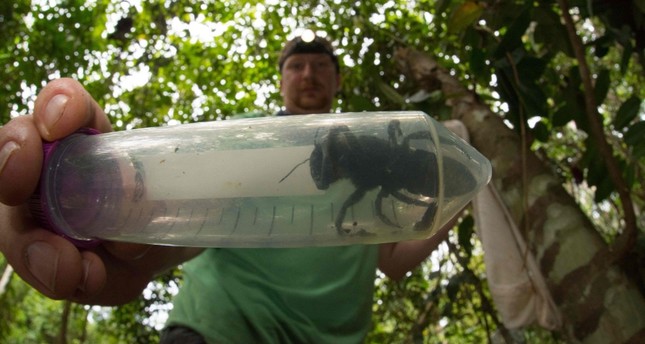 A group retraced Wallace’s trek for the Global Wildlife Conservation, searching for the elusive bee last month, that has a wing span of 2.5 inches. On the last day of their five-day expedition, with every person in the group sick, they managed to find the creature’s nest.

Photographer Clay Bolt said it was “the most remarkable thing I’d every laid my eyes on.”

Bolt wrote, “I simply couldn’t believe it. We had discovered Wallace’s Giant Bee.” He did a little victory dance, then made images and film of the elusive flying insect.

“My goal was to be the first person to make a photo of a living Wallace’s Giant Bee, and I had achieved that goal,” he wrote for the Glogal Wildlife Conservation’s website.

Bolt hopes to work with researchers in Indonesia to protect super-sized bees, which make their home in active termite mounds, he said.

“Just knowing that this bee’s giant wings go thrumming through this ancient Indonesian forest helps me feel that, in a world of so much loss, hope and wonder do exist,” he wrote.