A Javanese puppet is boldly going where no puppet has gone before.

In “Star Trek: Discovery,” the new series based on the sci-fi cult classic, a Wayang Puppet was spotted behind legendary Malaysian actress Michelle Yeo. This caused our northern neighbours to claim the puppet as their own. Since the episode aired, it has been confirmed to be a Javanese puppet called “Antareja,” leading it to be the furthest intergalactic travelling Wayang Kuilit, or indeed any puppet, this side of Vulcan. 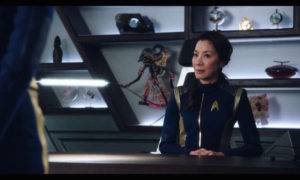 Antareja isn’t the only Star Trekker originally from the archipelago. “The Raid” and “Fast and Furious” actor Joe Taslim played a starring role as the villain Manas in “Star Trek: Beyond,” who (spoiler alert) met the same fate as every villain in all sci-fi movies.

So here’s to Java’s Wayang Kulit space cadet making a safer return to Earth and Indonesia than Taslim’s character!