“(The government) has neglected people’s rights to breathe healthy air.”

As lawyer Nelson Nikodemus Simamora told reporters after filing a lawsuit on behalf of environmental groups against the Indonesian President and several government officials on the 4th of July.

The 31 Jakarta residents – consisting of activists, office workers and Gojek drivers – are taking action against the worsening air quality of South East Asia’s most polluted city.

This unenviable crown has been particularly obvious this past month.

A constant thick blanket of smog has been suffocating the capital, recording high concentrations of harmful microscopic particles known as PM2.5.

In recent weeks, this has spiked nearly five times the level recommended by the U.S. Environmental Protection Agency (EPA).

Jakarta’s pollution levels usually see it amongst the top 10 most polluted cities in the world.

To the extent that it recorded air quality even worse than pollution kings Beijing and New Delhi.

This is quite a feat, considering that it is often healthier to smoke a pack of cigarettes than breathe the air of these megacities.

A misty cocktail of traffic fumes, smoke and emissions from coal-fired power plants encircling Jakarta are the main causes in this post-Idul Fitri haze. 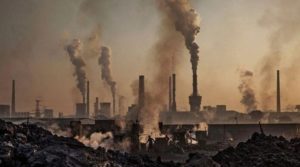 “They have not maintained air quality at a level that is healthy enough for the 10 million people living here.”

The lawsuit may be more symbolic than a road map to a blue-skied Jakarta.

But at times like these, and on grey days like this, the shining light of courage and truth provides a positive, pollution-free, breathable vision for Jakarta.

In fact, they’re the only ones that are.