Sulawesi is a beautiful part of Indonesia – with an ugly trade.

Dogs and cats are being blowtorched alive and bludgeoned over the head with bats in Indonesian street markets to supply market stalls, slaughterhouses, and restaurants with meat.

As part of a nationwide investigation, Dog Meat-Free Indonesia found that two out of 200 traditional animal markets in North Sulawesi killed dogs and sold their meat for food. 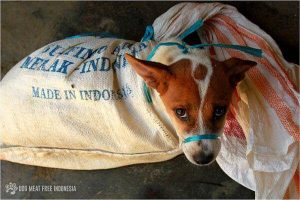 Their investigation found that:

Thousands of animals are taken and killed every week.

At least 1 million every year.

A quarter of the animals are thought to be cats. 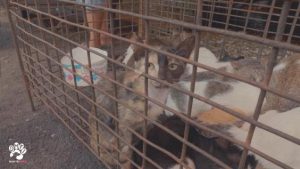 The practices and treatment of the animals have led to an international outcry, with over 90 celebrities signing a letter to Indonesian president Jokowi to end the horrific animal trade. 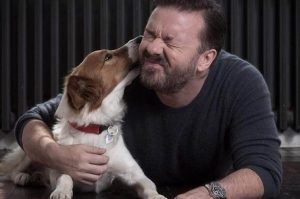 “These animals, many of them stolen pets, are subjected to crude and brutal methods of capture, transport and slaughter, and the immense suffering and fear they must endure is heartbreaking and absolutely shocking.”

“The footage is deplorable, and clearly documents the routine use of brutal handling and killing. We are sure you will agree that the level of brutality towards these dogs and cats is shocking and demands your urgent attention.”

Dog Meat-Free Indonesia has campaigned for a while on this issue and created a video to help raise awareness in and outside Indonesia.

Warning: Some parts are a little graphic:

Of course, this is not just the scourge of just a few markets in North Sulawesi. It happens all over the archipelago.

The issue of Dog Meat resurfaced in a big way last year when it was revealed that many warungs and vendors in Bali were selling dog meat instead of chicken sate.

There are concerns beyond the wellbeing of the dogs. The trade can have consequences for the health of humans as well.

The letter to Jokowi continues…

“Despite only a minority of Indonesians ever consuming dog meat, the trade in dogs for consumption threatens the health of the entire nation. The dog meat trade is the only trade known to encourage the large-scale, illegal movement of dogs of unknown disease and vaccination status… The World Health Organisation has explicitly highlighted the trade in dogs for human consumption as a contributing factor to the spread of rabies in Indonesia.” 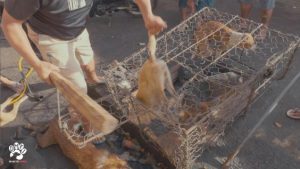 Jokowi has promised to end rabies in Indonesia by 2020. If this is going to happen, it must go hand in hand with ending the Dog Meat Trade in Indonesia.

If you would like to lend your support in ending the Dog Meat Trade in Indonesia, you can do so in the link below.

We’re sure the doggies would appreciate it: