Citarum river in Java is considered one of the most polluted rivers in the world.

This is why Major General Doni, Monardo, the new Military Area Command of Bandung has urged all elements of society to help solve the environmental catastrophe that is Citrarum. His efforts have been genuine, meeting with stakeholders regarding plans for rehabilitation.

Stock the lifeless river with 20 tons of fish, offer Rp. 200 million in total prizes to attract thousands of eager anglers in order to raise awareness. 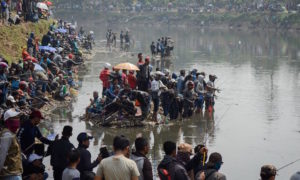 An interesting concept, that might have weirdly worked. Because on Sunday, 3rd June, one participant had an entirely unexpected catch.

Instead of hooking in the fresh tuna he came for, this unnamed fisherman reeled in the corpse of an unidentified man. Police estimate the dead man’s age to be between 20-30 years old. As of writing, there is no suggestion of violence found on the body.

Here’s the moment that the body was found during the competition.

Though dead bodies being found in Citarum is nothing new, this may be the most high profile example garnering the most attention.

The river flows along 269 kilometers and supplies 80 percent of the raw water for Jakarta and its surrounding areas. Its critical condition is a danger for the 24 million people who live along the riverbank, and also the people who eat potentially polluted produce from the 4,200 hectares of paddy fields that it waters.

As Gary Benchgib of Make A Change World explains in our WowShack 1-on-1 series, nothing could be more important and urgent than cleaning up the Citarum River…