A sperm whale found dead on Kapota Island, Southeast Sulawesi, had 5.9 Kilograms of trash inside its stomach.

The team from Wakatobi park, with researchers from the Academy of Marine and Fisheries Community in Wakatobi, WWF studied the whale after locals found the whale on Sunday. 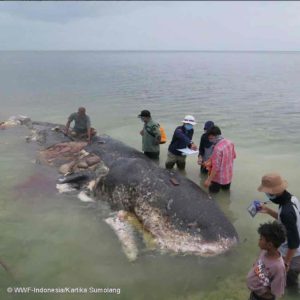 Because it was already decomposing, WWF explained that it could not confirm whether the whale’s death was actually caused by the trash.

But it doesn’t take a scientist to realize…

Trash was a contributing factor. 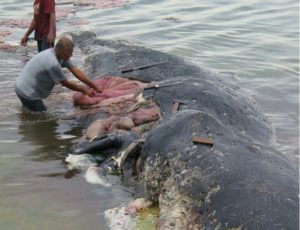 A picture from WWF of the stomach’s content showed that the whale had swallowed what looked like a piece of melamine dining plate. 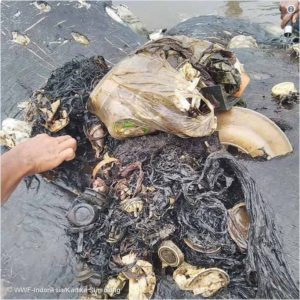 This is the new normal.

Decades of conspicuous consumption and ignorantly littering means that more great beasts of the ocean will share the same fate as our Wakatobi sperm whale.

As of 2014, there were an estimated 5.25 Trillion pieces of plastic in the ocean.

Sadly, the urgency is not cleaning up what’s in the Oceans now.

But what we can do is stop the 8 Million tons of plastic entering the oceans annually.

We need to stop the tap.

We need them now. 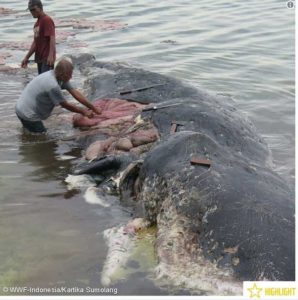 Every plastic item for the mildest convenience has it’s cost on Indonesia’s marine diversity.

If our Wakatobi Whale’s death is not going to be in vein, remember him/her by:

Refusing Plastic Bags At Your Minimart

Because make no mistake…

The pressure is on.