A painting depicting a Sulawesi Warty Pig has been confirmed to be the world’s earliest artistic depiction of an animal.

At least 45,500 years-old, this Red Ochre painting spanning 136cm by 54cm and found in Leang Tedongnge cave, provides the earliest proof of settlement on Sulawesi.

An island that is proving to be an important region in the early human story. 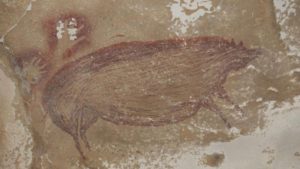 The landmass of Sulawesi was an island at the time, even when most of modern Indonesia was contained within Sundaland. A stepping stone for the descendants of Australia’s Aboriginals. 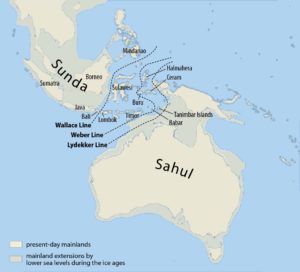 Not only does it prove that Sulawesi’s first settlers were advanced enough to be seafaring peoples, but, according to archeologist Maxime Aubert, the co-author of the report published in Science Advances journal:

“The people who made it were fully modern, they were just like us, they had all of the capacity and the tools to do any painting that they liked.” 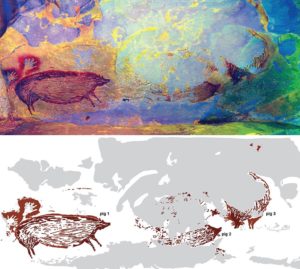 National Geographic | The cave art may depict a scene with multiple pigs interacting. But erosion has swept away most of the bodies of two—possibly three—of the creatures, making it tough to say exactly what the original image portrayed.

Archeologists believe there are two other pigs mid-squabble, as well as two human hand prints. The oldest hand stencil in the world.

Despite the pig’s depiction being fatter than the average pig in the region, Adam Brumm believes that it’s size suggests the greatest hunting prize:

“They’re very, very, small little pigs, but these ancient artists portrayed them with such resplendent fatness, which I imagine was something to do with their interest in killing the largest and fattest pigs they could find, which yielded the largest amount of meat and protein.”

Using radioactive Uranium-Thorium method to date the painting by chipping some of the rear leg, meaning 45,500 years is the earliest conservative date. It could be much older. 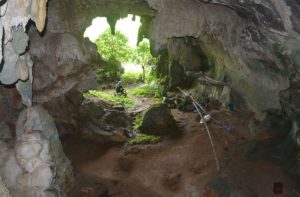 While a 73,000 year-old hashtag doodle represents the oldest known drawing, the detail of the Sulawesi pig connotes another level of conceptual art. 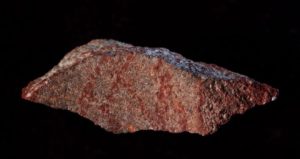 It’s also evidence that moves away from a Eurocentric view of cave art origins, that supports the view that our Ancient Indonesian ancestors were artistic pioneers transforming their relationship to their environment.

It speaks to a larger, globally sustained change in human behaviour and development, independent of each other.

Indeed, Sulawesi alone has over 300 caves with imagery contained within. 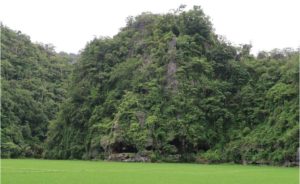 One thing is for sure, Brumm believes; there’s more to be revealed from Sulawesi’s original artists:
“It just shows how much artwork is there waiting to be found on this island. It’s hiding in plain sight.”
This is just the begning.
Sources: BBC | National Geographic | The Conversation
Continue Reading
Related Topics:BBC, Cave Art, Featured, indonesia, National Geographic, painting, Pig, Sulawesi