Pulau Weh may provide one of Indonesia’s greatest island getaways.

Poking off Sumatra’s northern coast, an hours boat journey from Banda Aceh, Pulau Weh has everything you could want from a holiday. 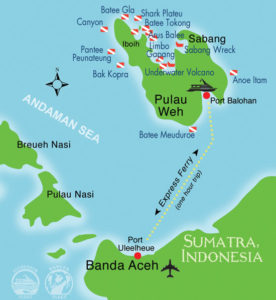 Following the 2004 Tsunami, Pulau Weh rejuvenated itself and is experiencing a renaissance in tourism, without feeling overcrowded. At least, not yet. That’s why the time to visit is now. 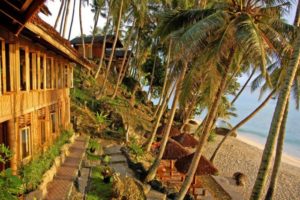 Sabang’s premier beach is Sumur Tiga, and its unrivaled resort is Freddie’s. Run by a charismatic German, Freddie, who makes a genuine effort to make your beach bungalow feel like home, you’ll be cursing yourself that you didn’t stay longer.

Sabang itself is a tiny town. Hence why most travelers make a B-line to Ibioh Beach. This is where the magic happens.

A handful of eateries outnumbered by dive shops, Ibioh is where time proceeds at the pace it’s supposed to – a leisurely one. 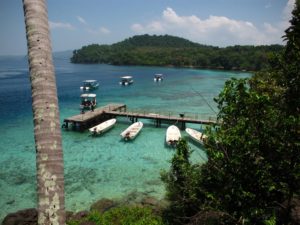 Indonesia is one of the world’s best places for diving. Though uniquely positioned off the Indian Ocean, the life aquatic provides something different to the rest of the Archipelago. 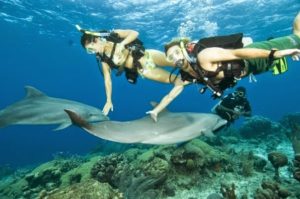 4) Motorbike or Becak Around

Forget taxiing around. The traditional Becak rules the roads in this part of the world.

Rolling around in a pink, hello kitty monstrosity, with a driver’s obnoxious, custom-made horn that might as well scream – “Coming Through! I have tourists!” – is a novelty that doesn’t wear off.

Though when you don’t have your bags, hire a bike to explore the island. Pulau Weh takes 4 hours to circumnavigate, with hours more adventure time to be had in the heart of the island. 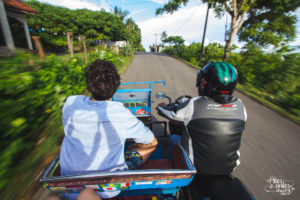 Pulau Weh has a majestic Lake near Sebang that can be enjoyed from either a hilly viewpoint or lakeside. Either way, it’s worth taking in. 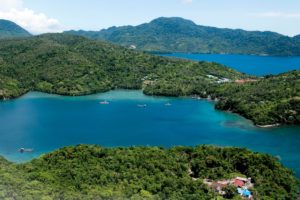 In between Ibioh and Sebang, lies a hidden waterfall, Air Terjun Pria Laot. A manageable though slippery and sweaty hike, your reward is the refreshing pool at the end. Well worth the effort. 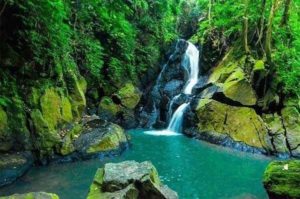 The island is full of surprises… did you know the Japanese erected a fort in WWII on Pulau Weh?

With the intention of defending against a potential British invasion from Singapore once Japan occupied Indonesia, this fort gives you a sense of the totality of Japanese presence in the country and how global the conflict was.

But not the worst way to see out the war! 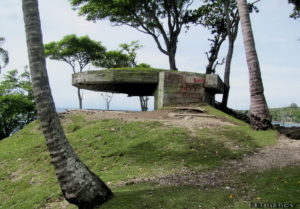 While zooming around, you may come across a few warungs that overlook a bay that includes Pulau Klah. Rather than gawking on your bike and risking a crash, take an extended moment to enjoy the view. 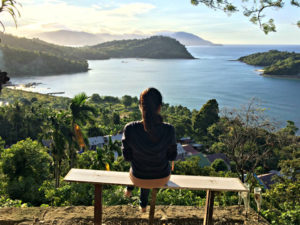 She Walks the World

A short stretch from Ibioh lies the small island of Pulau Rubiah. With azure water clearer than air, it provides incredible snorkeling opportunities right off the beach.

The view of Ibioh beach, with its numerous bunglows tucked in the trees and mored boats, is worth the Rp. 30,000 trip alone. 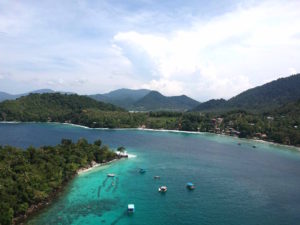 Enough relaxing for one lifetime? It’s time for an expedition up an active volcano.

Though not in the same ferocity bracket as a Mt. Sinabung, Gunung Api is a sulfur stinking mound that is far more fun than it sounds. It’s also a fantastic reminder of the variety and abundance of volcanos we posses on the ring of fire. 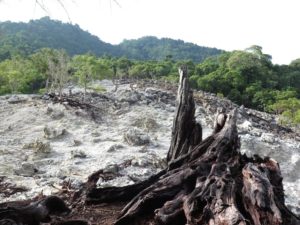 Sabang’s beach, Pantai Kasih has been built up like a Mediterranean beach. Though the only thing to do is sunbathe and selfie.

On the southern coast, Pasir Putih gives you a panoramic view of Aceh, and the lesser-known islands of Pulau Breueh and Pulau Nasi. 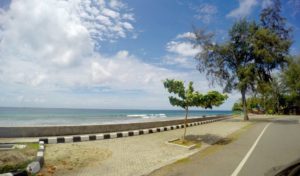 Once you’re there, you may hear locals and seasoned travelers talk of a secret beach. So secret, Google Maps doesn’t know about it yet! (And don’t go telling the almighty Google, either).

However, if you are inducted into the exclusive club of “people in the know”, you’ve got to check it out. Straight out of the movie “The Beach”, it’s Pulau Weh’s best sandy stop by far. 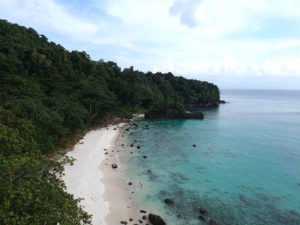 You’ve literally made it to the end (or begining) of Indonesia. Suitably landmarked with an impressive structure, Kilometer Zero is the final (or first) frontier of our amazing archipelago.

Though if we are going to be truthful and burst the bubble, it’s not. Rondo Island is the most northern point as we detailed in our Most Extreme points of Indonesia article.

But you can see it off the coast, and that’s good enough! 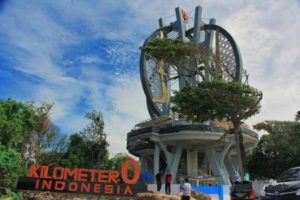 As part of the Aceh province, Pulau Weh adheres to Sharia law. While it’s prudent and polite for women to cover their shoulders and knees in the town centers, beaches, and other nonresidential areas are generally relaxed.

The religious and social atmosphere in the region is entirely different to what one might expect. Upbeat and welcoming, rather than uptight and uninviting. Pulau Weh does offer the most positive vibe in the region and is why many of Aceh’s ostracised LGBT community end up living around Sabang. 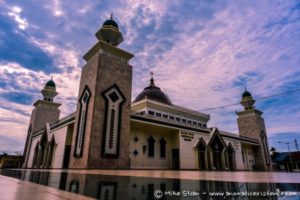 Though this strictness does pose certain obstacles.

Indonesian couples must prove their marital status if they are to share any cabin on the island as well as Bintangs costing upwards of Rp. 40k. A small price to pay for everything else being so cheap, and an effective paywall to prevent the holiday drinking hoards coming, and helping Pulau Weh maintain its tranquility.

When you are in Pulau Weh, the effects of the 2004 Tsunami linger like the unrivaled horror it was. Though it’s burst through its traumatic recent history stronger than ever. Aid agencies have built some of the best roads in Indonesia, to international standards. To such an extent that Sabang is unlikely to ever have a traffic jam. 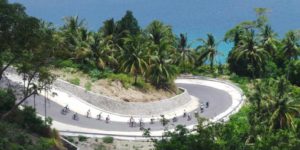 Pulau Weh is a special place.

It has everything you could possibly want in a holiday, from heart-racing hikes, incredible sights, and unbeatable beaches. Soft sand met by calm, clear azure ocean is an increasing rarity from an island holiday.

And with everything so cheap compared to many other Indonesian getaways, Pulau Weh is an island secret that is getting more and more exposure.

Can The Komodo Dragon Survive A 6,000% Increase In Chinese Tourists?
Indonesia Holds World Record For The Highest Hammock Tower