Mt. Tambora, on the Indonesian island of Sumbawa, exploded the world into a new era when it erupted 200 years ago. It shook the world in many ways, some you won’t believe.

Here are 12 Incredible facts about the 1815 eruption of Tambora…

The Volcanic Winter caused by the 1815 eruption caused huge food shortages all across the Northern Hemisphere. 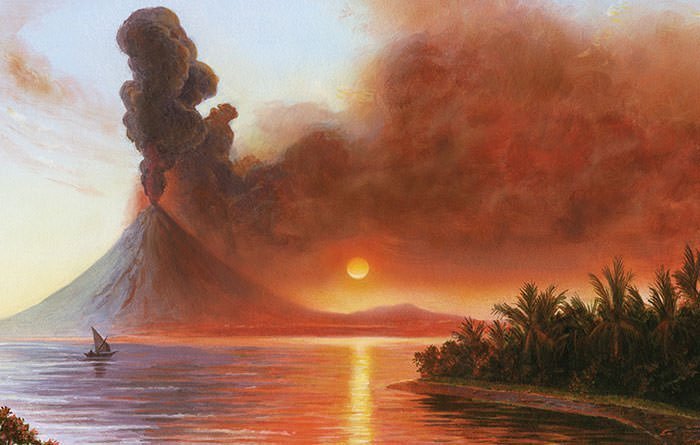 That’s the same impact that all man made climate change so far! Though not an excuse to stop caring about the environmental crisis – In fact, it’s proof of the damage slight changes to global temperatures can do. 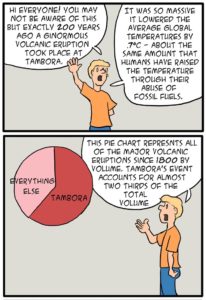 The huge eruption had an incredible effect on global temperatures.

4) It is the only known eruption rated as a 7 on the Volcanic Explosivity Index (VEI) since the Lake Taupo eruption in New Zealand, around AD 180

That’s a lot of rock. 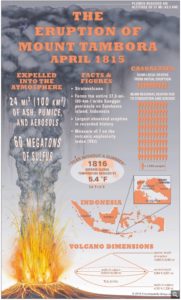 6) The largest eruption ever properly recorded with an explosion, equivalent to 800 megatons of TNT.

To show how crazy that is, the most powerful atomic bomb ever detonated was the Soviet Tsar Bomba, at 50 megatons. The atomic bomb dropped on Hiroshima was 0.2 megatons… 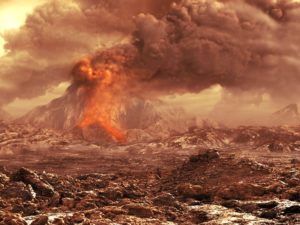 10,000 people perished as a direct result of the eruption, while 70,000 died in the aftermath, mostly due to famine. Some experts put the total estimate at over 100,000 deaths in Indonesia alone. 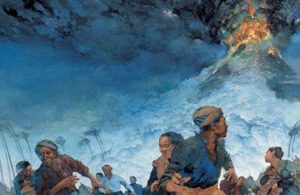 8) It Sounded So Much Like Distant Warefare, That Sir Stamford Raffles Sent Troops To Investigate

“The first explosions were heard on this Island (Java)… The noise was, in the first instance, almost universally attributed to distant cannon; so much so, that a detachment of troops were marched from Djocjocarta (Yogyakarta), in the belief that a neighbouring post was being attacked, and along the coast boats were in two instances dispatched in quest of a supposed ship in distress.”
—Sir Stamford Raffles’ memoir. 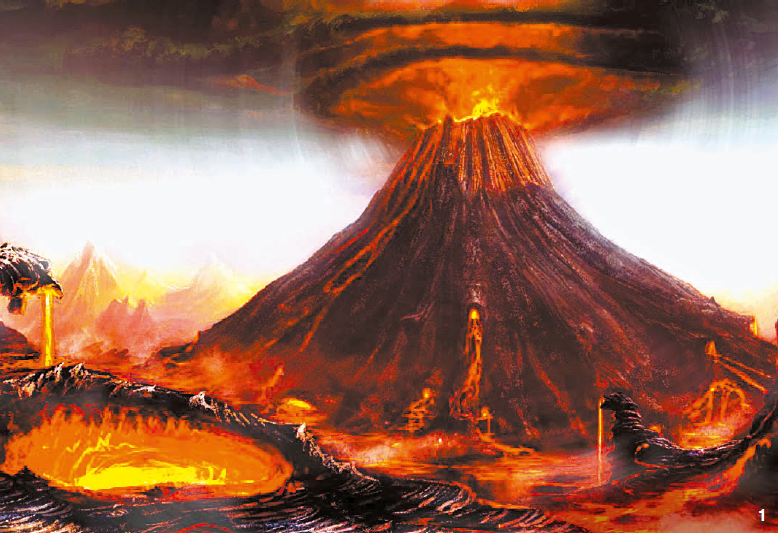 9) Once Raffles Understood Tambora Had Erupted, He Sent A Party To Investigate…

“On my trip towards the western part of the island, I passed through nearly the whole of Dompo and a considerable part of Bima. The extreme misery to which the inhabitants have been reduced is shocking to behold. There were still on the road side the remains of several corpses and the marks of where many others had been interred: the villages almost entirely deserted and the houses fallen down, the surviving inhabitants having dispersed in search of food.”
—Lt. Philips, ordered by Sir Stamford Raffles to go to Sumbawa.

The crop failures of the “Year without a Summer” inadvertently helped shape the settling of the “American Heartland.” Due to the volcanic winter, farm families left New England in search of more hospitable climates and better growing conditions. This helped form the state of Indiana in 1816, then Illinois in 1818. 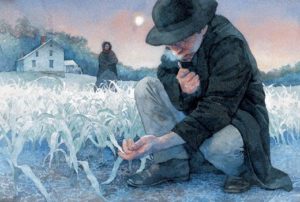 The large movement of people into what is now Western and Central New York played a huge role in making it the hub of the anti-slavery movement.

11) The Invention Of the Bicycle

Say what? It’s true. Because of crop failure, oats skyrocketed to over 700% of their pre-“Year Without Summer” price. Since oats were used to feed horses – the main source of transportation – the price of travel increased dramatically.

Necessity brewed ingenuity. A German named Karl Drais invented a way to get around without a horse at this time. And thus the bicycle was born.

During the gloomy 1816 summer, Literary legends Lord Byron, John Pidoltri and Mary Shelley went on vacation to Lake Geneva. Trapped in their house for days due to terrible weather, they had a contest to see who could write the scariest story. From this literary brainstorm came Mary Shelly’s masterpiece “Frankenstein”, Lord Byron’s poem “Darkness” and Pidoltri’s “Vampyre,” the spawn of “Dracula” and all other Vampire related stories. 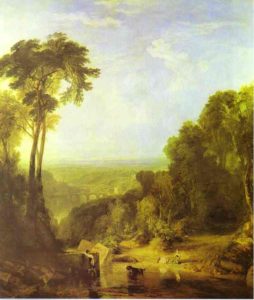 J.M.W. Turner – Contemporary artist who was famous for painting the “Yellow Skies” of the era

The titanic eruption of Tambora is a reminder of the devastating power that lurks beneath our feet. Since the Ring of Fire remains the most active volcano belt in the world, it could happen again.

Lord Byron’s poem Darkness began with: “I had a dream, which was not all a dream. The bright sun was extinguish’d.”

Our final fact? Byron’s dream could easily become our reality…