Poker continues to grow in popularity in the Asia-Pacific region, with more and more people turning up at live events and playing online at home. One of the biggest poker events in the region is the Asian Poker Tour, which takes place across many nations offering millions in prize money.

So far, the Asian Poker Tour hasn’t set up an event in Indonesia yet, but it may be on the way. In 2018, the tour made its first appearance in Seoul, Korea, and has some dates open in the schedule of the 2019 tour. While there is a huge range of entertainment to be enjoyed in Indonesia, the APT stepping over into Indonesia would only help to bring in tourism and offer an exciting gaming experience for residents. 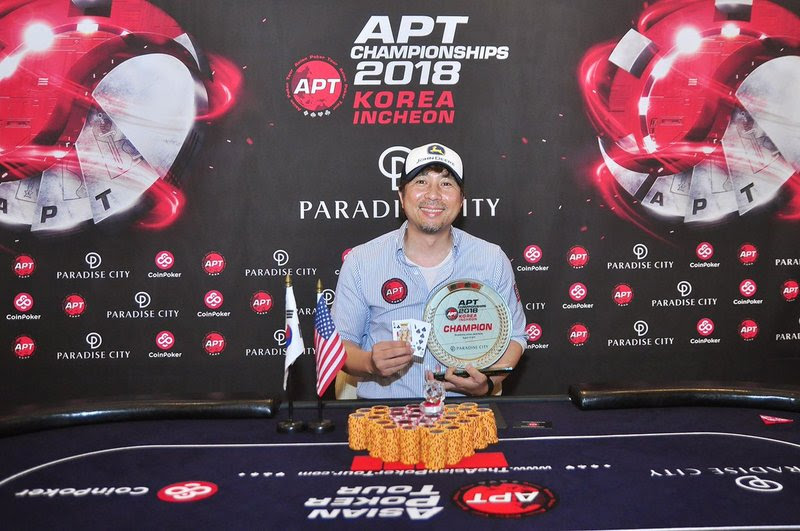 Winner of the Incheon Korea Championships Event on the Asian Poker Tour, Jaepil You, celebrates his win with the trophy and his mound of chips. Source: So Much Poker, via Twitter

Founded in 2008, the Asian Poker Tour has gained a huge following of poker players. Not only does it draw in Texas Hold’em fans from the regions that host the events, but other people from all around the world show up to test their luck. For example, the Seoul, Korea events saw someone from Canada, and someone from the United Kingdom takes titles. It may take place in select locations, but poker fans from all over flock to get a piece of the action.

The tour has grown from taking place in the Philippines and Macau to the 2018 season, which hosted events in Vietnam, the Philippines, Macau and Korea. But, the APT has also ventured away from its namesake region, with events held in London and Australia in the past. Cambodia, India and New Caledonia have also featured on the calendar in the past.

The Asian Poker Tour will have hosted 86 major poker events by the end of the 2018 APT, which finishes up on 8 December at the APT Finale Macau Championships. The preferred format of poker at many of the events this year has been No Limit Hold’em poker, with some Omaha hi/lo events, with some additional tweaks to keep it fresh, including games like Monster Stack, Deep Stack Hyper-Turbo, and Head Hunter.

APT continues to grow in popularity 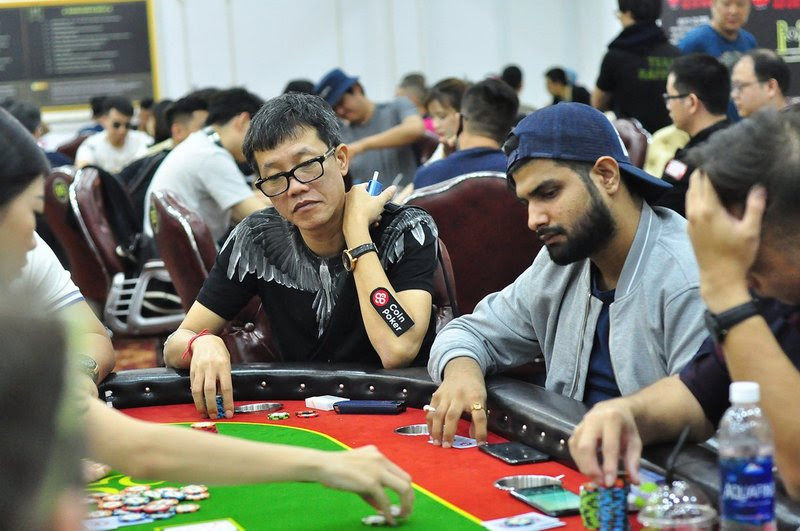 At the 2018 Vietnam Asian Poker Tour Main Event, players in a packed poker hall check their cards and place their bets. Source: Coin Poker, via Twitter

From its humble beginnings as a two-event tour to its biggest calendar of 15 dates in 2016, the Asian Poker Tour has grown immensely over its ten years of activity. In 2018, the tour only scheduled nine dates, dropping from two from 2017. But, 2019 is expected to return to the count of 11 major events.

To say that the APT is popular would be an understatement. The events all over the Asia-Pacific region draw in poker players and fans from all over the world, with the number of people participating in the events being very impressive. The first six Main Events or Championship events on the 2018 APT saw a combined 1,689 entrants, with many more turning up to partake in the other tournaments at each event.

Between 2003 and 2006, no limit Texas hold’em poker and its variations become immensely popular around the world, with the period now being known as the ‘poker boom’. During this time, the number of people playing poker online more than doubled every year. But, while the boom slowed down significantly in the USA when new laws forced out online poker providers, it continued to grow in popularity elsewhere in the world.

In the Asia-Pacific region, poker remains an incredibly popular past time, as does gambling as a whole – with Macau challenging Las Vegas as the gambling capital of the world. The increase in popularity of online poker helped to raise the sport’s prestige. Poker players found that they could go online and play at their own pace to sharpen their playing skills, discover their weaknesses, and develop their A-B-C poker games. Through playing many games online and using the best poker videos, online gamers quickly became skilled and confident enough to take their chips to the plush felt tables at live events.

While there is a lot of money on offer in certain online poker rooms, unless there’s a large online tournament, the serious money is at the live events. So, poker fans around the world began to seek out the biggest poker tournaments, especially those offering Texas hold’em poker, to win even greater prizes.

The Asian Poker Tour started up at exactly the right time. The organisers established tournaments and events that offer plenty of big-money prizes as well as the ability to play poker at various locations in the region. 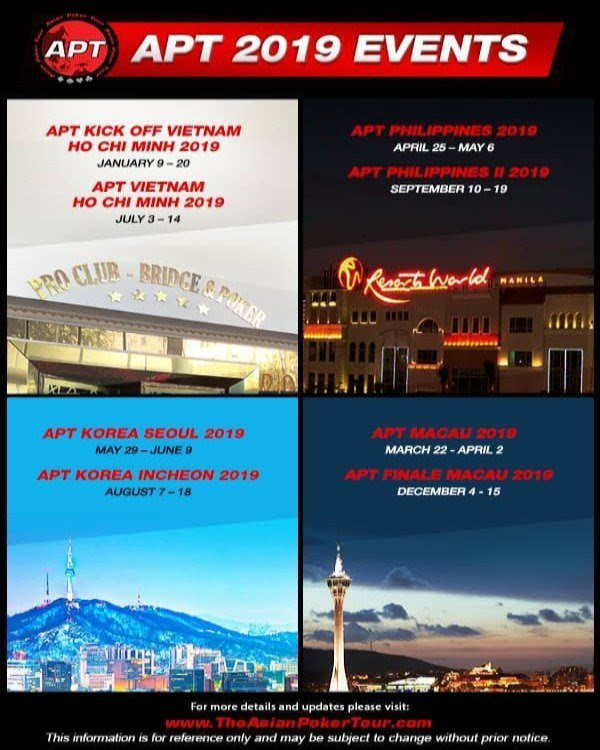 Much of the Asian Poker Tour 2019 schedule has been announced on the tour’s official website; however, there are still a few key dates that remain empty. To start up the tour once again, the APT Kickoff event will take place in Ho Chi Minh, Vietnam, on 9 January. The next event is expected to take place at the end of February, but a location is yet to be determined.

Events starting in March, April, May, July, August, and September, will be hosted in Macau, the Philippines, Seoul, Ho Chi Minh, Incheon, and the Philippines, respectively. With two dates separating the second trip to the Philippines and the APT Finale Macau, there are three chances for brand new locations to be added to the tour.

Indonesia is in fairly close proximity to the Philippine and Vietnam, so if poker fans in the region want to watch or compete in the Asian Poker Tour, they can make the trip over. But, with the tournament’s director stating that a completely new location will be added to the schedule, there is a slight chance that an event will take place in Indonesia – APT has certainly travelled further south than Indonesia before.

The Asian Poker Tour continues to grow in popularity and spread its reach to new locations in the Asia-Pacific region. Indonesia may well be the next new nation to host an APT event, but, even if it isn’t in 2019, it could be further down the line.