Indonesia is a national economy on the rise.

While Jakarta is the country’s unrivalled megacity hub, it’s the cities outside the capital that are crucial to the nation’s current and future growth.

The likes of Surabaya, Bandung, Makassar – as well as a host of other cities spread across the 2 million square kilometre archipelago – are the real drivers of this diverse economy. 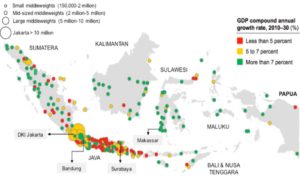 Jokowi’s re-election is evidence of the desire to decentralise economic prosperity in favour of the “Second Cities”.

Over the last 10 years, Indonesia’s average GDP growth of 5.6% annually has lead to it becoming the world’s 10th largest economy.

This has come with a huge rise in urbanization. 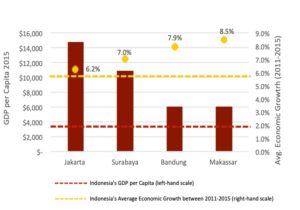 This exponential growth is far beyond the carrying capacity of Jakarta – the world’s fastest sinking city. The rest of Indonesia’s cities need to shoulder the responsibility for growth.

And preparation is already under way.

While a whole host of cities from Jayapura to Medan have similar trajectories, the scope of this article is going to focus on Indonesia’s 3 fastest growing cities; the capitals of East Java, West Java and Sulawesi.

The capital of East Java has a population of 2.85 million people. 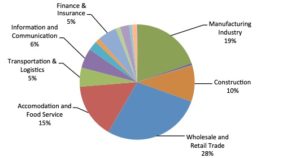 Progressive leadership – epitomised by appointing it’s first female mayor in 2010 and being awarded the “ASEAN Environmentally Sustainable City Award” – has been a key factor in a thriving modern economy. 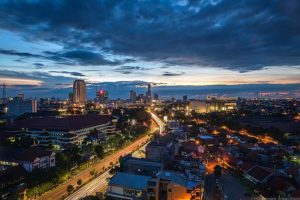 The importance of it’s port is a huge signifier and driver of growth, handling SEA wide trade.

More than 3.2 million containers were turned over in 2015, exactly double that of Jakarta – a city with four times the population. 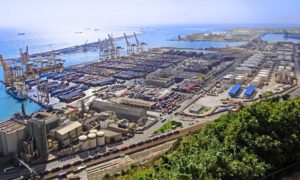 The visible macro-fundamentals are also improving: residential, commercial and hotel projects are increasing, signs of a hungry and thriving middle class.

Bandung is the hub of domestic tourism, largely generated through a strong history of retail and textile trades. 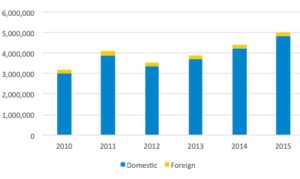 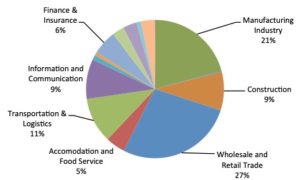 But what is really exciting the 2.5 million people that call Bandung home – soon to be 4 million by 2030 – is the move to make Bandung the tech capital of Indonesia. 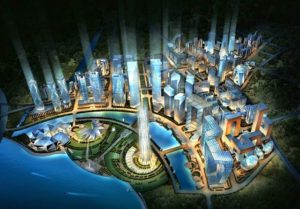 Combine that with a Light Rail Transit (LRT) to be completed by 2020 that would take you from Bandung to Jakarta in 30 minutes, and you have an infinitely more attractive city for fintech.

The capital of Sulawesi is effectively the gateway to Indonesia, connecting all the islands between Sumatra and West Papua.

It’s wholesale and retail trade has made it a hub of SEA trade. 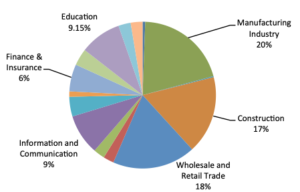 The local government signed an agreement with International Enterprise of Singapore’s Ministry of Trade and Industry, to help develop Makassar into a “smart city” of innovative urban and technological solutions. 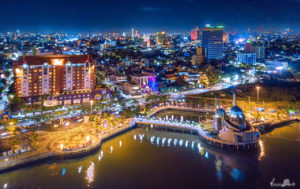 This will increase container turnover capacity by a factor of 5. 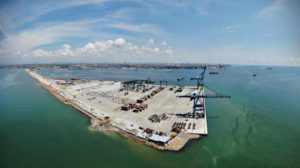 As a result, Makassar has witnessed an accelerated urban development and a booming construction sector, which is making it an attractive place for investment.

In 11 years, Indonesia’s population will be touching the 300 million mark.

The next few decades are also fraught with confusion.

While the world wrestles with a technological revolution, it’s still unclear where Indonesia’s capital city will be… in Kalimantan or under water.

But clearly the understanding, intention and investment is there.

If Indonesia has any chance of handling this growth and managing modernisation, it’s the cities outside of Jakarta that will be responsible.

Indeed, the coming decades will likely be the age of Indonesia’s Second Cities.