Connect with us
Photo: Gerd Schuster / Thinkers of the Jungle

Orangutans are known for their intelligence and sometimes for using an assortment of tools during their daily life. Opposable thumbs help the primates pick up items and build sleeping nests while living in the wild. This sort of human-like behaviour may not be overly surprising to some because after all, we share 96.4 percent of our DNA with orangutans.
Take a look at the three amazing examples of such behaviour below.

1) Using A Spear Tool To Fish

Gerd Schuster, co-author of Thinkers of the Jungle: The Orangutan Report describes the below photo he captured as:

“A male orangutan, clinging precariously to overhanging branches, flails the water with a pole, trying desperately to spear a passing fish…

The extraordinary image, a world exclusive, was taken in Borneo on the island of Kaja…

This individual had seen locals fishing with spears on the Gohong River.

Although the method required too much skill for him to master, he was later able to improvise by using the pole to catch fish already trapped in the locals’ fishing lines.” 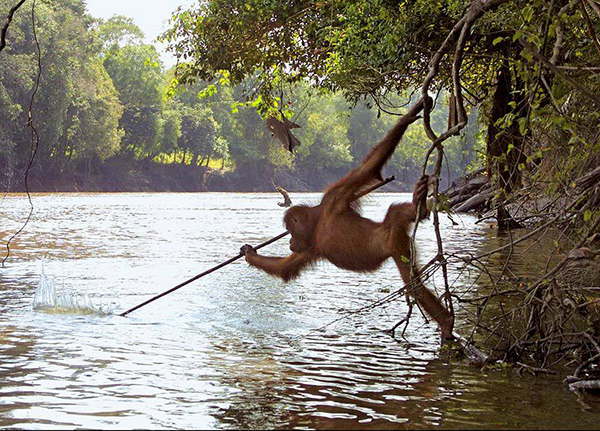 Gerd Schuster / Thinkers of the Jungle

The intelligent primate was watched by stunned visitors at the Tama Zoological Park in Tokyo as used it used a washcloth to wipe its forehead. It’s shown dipping a cloth in water, ringing it out and wiping its face and upper body. The primate even mops up spilt water droplets afterwards.

3) Using A Boat And Washing Clothes

This video, from the YouTube channel ‘Fantastic Animal’ was filmed at Camp Leakey, located in the Tanjung Puting National Park of central Borneo. It shows fascinating footage of one particularly clever orangutan who has learnt how to wash clothes from observing humans living at the camp.