Ikat has been part of the Indonesian archipelago’s cultural history for millennia.

Indeed, it’s an age old tradition in almost 30 countries around the world.

Ikat fabric is created using a skill-intensive process of marking, tying and dyeing the design into the yarn before it is woven.

But as one of the oldest forms of textile production, pinpointing the exact origin of Ikat is difficult.

Since textiles, and the wooden looms that make them, don’t confront the passage of time very well, it’s hard to place exactly where and when they first originated.

What is clear, is that the strongest traditions, with the widest variety of styles and products, are from Maritime South East Asia, the Indian Subcontinent and Central Asia. 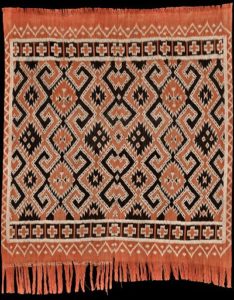 The intimate and ancient trade routes of the region blur the Ikat origins history into one tapestry. Quite fitting, considering the fuzzy Ikat style.

Though as Central America cultivated its own form of Ikat pre-Columbus, there’s a strong case that the process could have emerged independently around the world. 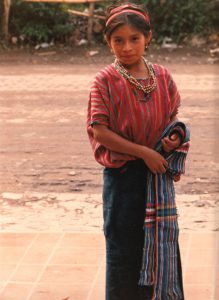 The oldest surviving example of Ikat was an Indian Odishan style found in a Pharaohs tomb, at least 5,000 years old. It’s also proof of the longstanding trade between India and Egypt. 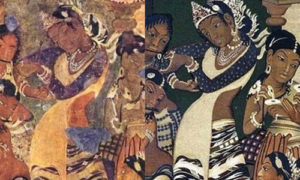 In fact, India’s silk based Ikat was a form of currency along the Silk Road in ancient times. 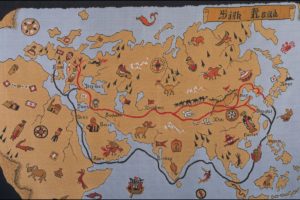 However, this should not be seen as a full-fledged Indian claim to the original Ikat patent.

The art form spread through the Austroneasian-world like wildfire in early history. Technical similarities between Indonesian and Madagascan styles are evidence of South East Asian settlement within the 1st Millennium AD. 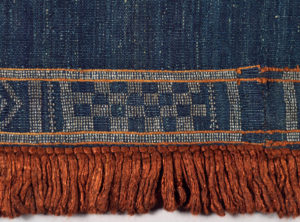 Indonesia’s relationship with the cotton fabric is strong, long and dispersed. Over time, different regions across Indonesia’s 17,000 islands perfected their own designs and production styles, which are still regionally represented today.

There are 3 styles of Ikat production. Crudely describing them in order of difficulty, they are: Warp, Weft and Double Ikat.

The Iban of Borneo, the Toba Batak’s of North Sumatra and cultures throughout Nusa Tenggara – from Flores to Sumba – have a strong Warp Ikat tradition. 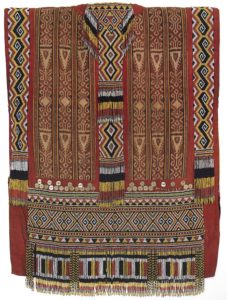 The Weft technique is well established in South Sumatra and Bali.

But one village stands out in South East Asia as the spiritual home of the complicated Double Ikat process. Tenganan, East Bali. 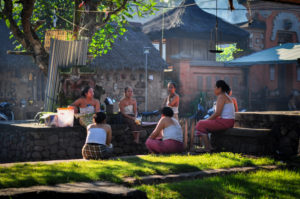 The small village was famously known as one of the most isolated areas throughout the entire country until the mid-20th century. 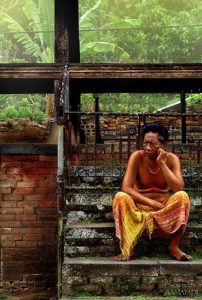 According to legend, the people of Tenganan Pegringsing were selected by the Vedic deity Indra to enact his divine plan within an anointed territory.

A godly and pure world within a microcosm. 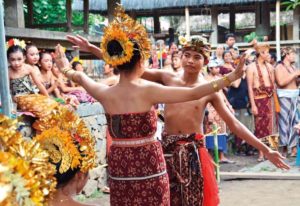 Through this devout isolation, they cultivated an unrivalled skill for producing the patience-testing style of Geringsing Double Ikat. 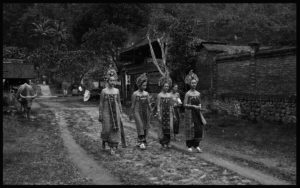 Looking Through The Lens

How The Purpose And Value Of Ikat Changed History

Ikat has traditionally been used on ceremonial occasions.

Everything from dowry exchanges, wedding and funeral attire, to being buried with the deceased, offerings to the gods, and every ritual in between. 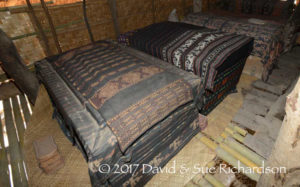 If there was a ceremony, the presence of Ikat was a given. The better the Ikat, the higher the status of the individual and respect for the occasion. 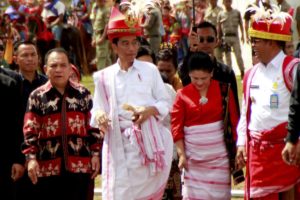 It’s value comes in the intricacy of the process.

It is an incredible feat of textile manufacturing process; an art form that, when conducted the traditional handwoven way to the most expert degree, can take between 1-2 years to complete. 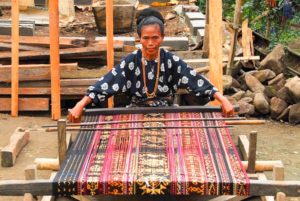 It’s this input of time and skill that that gives Ikat it’s value. It also made it an exchange commodity with serious implications for Indonesian history.

Firstly, the Portuguese, then British and most effectively the Dutch East India Company used Ikat as a medium of exchange for control over the Spice trade. 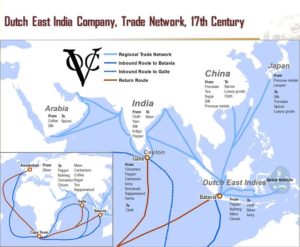 Eventually, the Dutch gained hegemonic control over the entire trading routes of the “East Indies” largely through exchanging Ikat from around the world with the local Sultanates of the region. 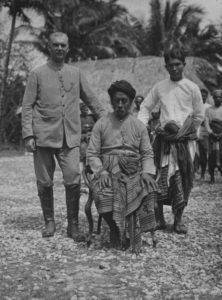 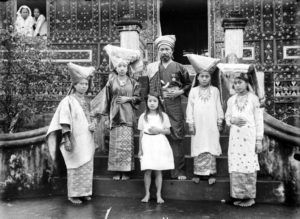 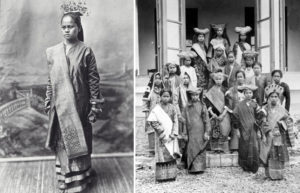 As a result, the Dutch East India Company became the most valuable company of all time, valued at $8 Trillion when adjusted for inflation. 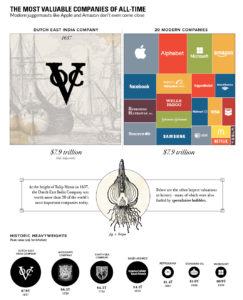 The independent Sultanates desire for Ikat lead to Dutch dominance of the Spice Trade, control over the Indonesian archipelago and the eventual struggle for Indonesian independence. 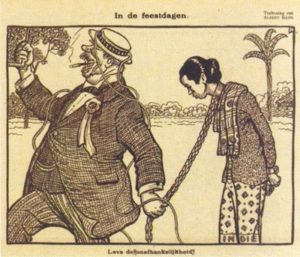 How many textiles can claim to have made played such a vital role in history? 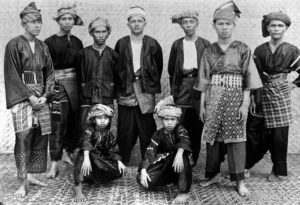 It was also via the Dutch in the early 20th Century – now equally as entranced by the textile as their Asian originators – that the word “Ikat” entered common European textile vernacular.

As a result, “Ikat” has become the universal term for the process, unifying millennia long textile tradition under a universally recognized term. 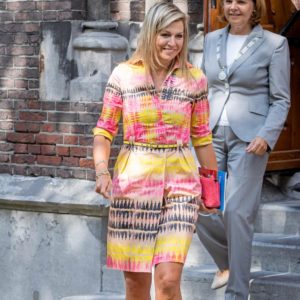 Queen Maxima of The Netherlands Wearing An Ikat Dress, 2017 | Popsugar

Though with globalization comes transformation.

Traditionally, it has been a female-dominated venture and artistic expression.

Nowadays however, commercial workshops have reduced the year long process into a single day in some instances, particularly when producing Weft Ikat, and men have taken control of owning the manufacturing process. 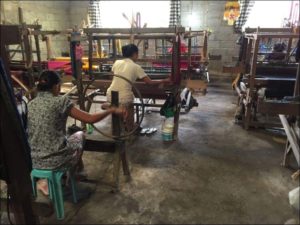 While this commercialization of the Ikat production has wrestled the exclusivity from the upper classes and afforded everyone the opportunity to own Ikat, the special history of Ikat has been somewhat lost along the way. The commercialisation of and modernisation of the Batik style is exemplified by the online shop ‘BatikTees’ at https://batiktees.com/.

Alongside Ikat, Batik has remained ubiquitous and accelerated in popularity since machine production. After all, it’s known as “Batik Friday” not “Ikat Friday.”

Some say the thickness of the material, particularly of Double Ikat, has perhaps played a part in its dwindling prevalence within its Southern Hemisphere birthplace.

Though this is not an inevitability or destiny. Far from it.

Indeed, the proud tradition of Ikat is waiting to be reinvented for the modern era and rediscovered by a new generation of Indonesians. 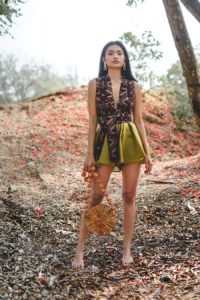 Mahara Is A Collection Revitalizing Ikat For The 21st Century | stateofmahara.com

It’s truly astounding that the world has unified around the Ikat process, either through trade or independently, throughout history.

Wherever and whenever the first ever Ikat was produced, the story is a comforting reminder of humanity’s shared tastes, skills and ability to exchange.

Indonesia should never forget it’s unbreakable bind to Ikat and remain proud of the textile that has woven itself into the archipelagos history.