The Dani are the indigenous people of the Baliem Valley in Irian Jaya, along with the Yali and Moni, they are the main tribes in and around the valley.

A remote and hard to reach land. The Dani have been described as Stone Age people; when they were first ‘discovered’, the way they lived resembled how we imagine pre-historic man had once lived, sparking huge interest around the world.

Of course, it was inevitable that when modern society first set eyes upon the Dani, a change would ensue, and it has. Undoubtedly changes have taken place that has brought the Dani people closer to this increasingly homogeneous present we call modernity…

Prior to contact with people other than their own, the Dani ware a basic agricultural, hunting and gathering society, who used tools made of wood, stone and bone. They traded in shells and plumes and their view of the world was limited.
The difficult nature of the physical environment had huge effects on the pace of change, keeping them in and others out, allowing the Valley Dani to retain their tribal ways for so long. 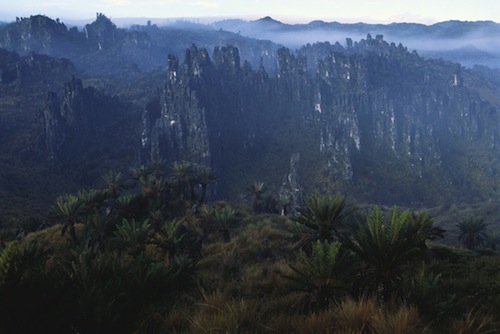 Traditionally, the Dani wear penis sheaths (koteka) or grass skirts, both men and women’s chests bare. They paint their faces with natural dyes, embellishing their necks with shells and pierce their noses with boar tusks. The men carried spears and arrows, not only for hunting but also for warfare.

The different tribes were once territorial, raiding each other for land and pigs. They worshipped fetishes and traded in shells or special stones. Some men had many wives if he could afford them. The women cut their fingers off when their loved ones died (Ikipalin).

But a lot of this has changed over time…

The Dutch East India Company placed itself within Indonesia, entering Papua in 1615. Then in 1848, they claim the west side of Papua, splitting the island down the ‘141st Meridian’.This was the birth of the separated New Guinea we see today, known then as Netherlands New Guinea.

In 1921, the Dutchman Captain Van Overeem was the first to meet the outer Dani people on his venture up the mountains surrounding the Baliem Valley. The following year, another Dutch captain meets the Dani, but his group spread foreign bacteria among the indigenous, many dying of dysentery. 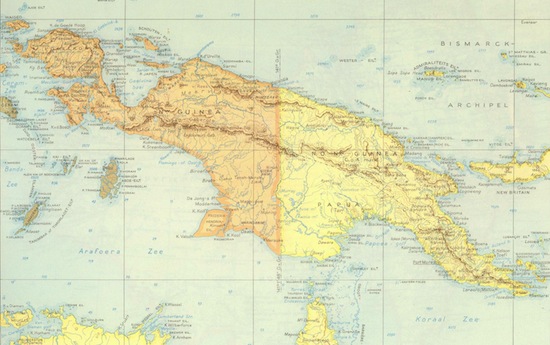 2) The Arrival of Science

In 1938, during scientific surveys led by American biologist Richard Archbold, the Grand Baliem Valley was spotted from the air. Presumed empty, he saw rows of ploughed fields – agriculture, a sign of life.

Richard Archbold lands inside the Baliem Valley meets the previously unknown indigenous tribes and researches them and the area. He writes a piece for National Geographic in 1941, sparking huge world interest in the ‘Stone-Age People’. Researchers descend upon the land, opening the Dani to a new world.

3) The Arrival of Religion

As accessibility to the isolated valley improved, missionaries began to flood in. Christian missions began converting the tribal Dani people. The Dani took to Christianity very quickly.
What happened as a result was a radical turn away from their old ways. They burnt their fetishes and idols, threw away their weapons and saw no need for the shamans and sorcerers. 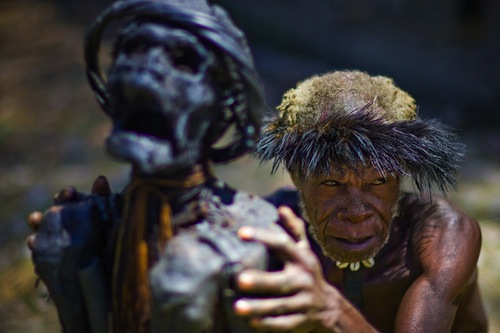 4) The Arrival of the War

Soon after their discovery, the Second World War had spread towards the Pacific and found itself on Papuan ground, bringing with it Japanese, Australian and American troops. This influx of foreigners and foreign thought open the Dani to a different world previously unknown! 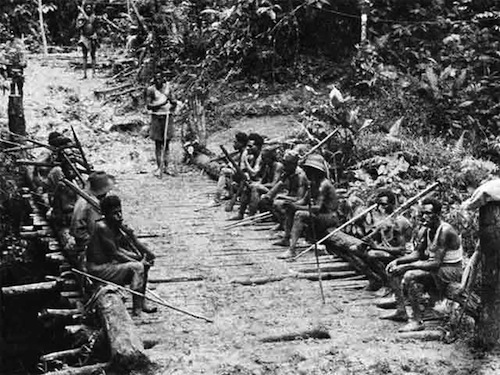 5) The Republic of Indonesia

After the war, Indonesia becomes an independent nation. The new government wanted to keep Netherlands New Guinea. The UN decided that the region would have a trial period under Indonesia starting 1963 until 1969 when they would then vote for their own future.

In 1969, 1025 Papuan elders were asked to vote for their people: be part of Indonesia, or become a nation of their own? This was known as the ‘Act of Free Choice’.

Accusations that the Indonesian military forced representatives by gunpoint or with death threats, telling them to vote for Indonesian authority. The vote was was unanimous; all 1025 voted against sovereignty. Indonesia gained official authority over what is now Irian Jaya. The signed ‘Act of Free Choice’ came to be known as the ‘Act of No Choice’.

The transmigration scheme saw an influx of Javanese Indonesians into Irian. The idea was to integrate the people, live side by side, but the local people saw it more as a territorial invasion. It is estimated that over 1,000,000 Javanese now live in Irian Jaya, making the indigenous people a minority in their own region. With this, the Indonesian language was also pushed upon the Dani, despite the range of local dialects already native to the region.

Many clashes arose with the new migrants and indigenous. Disagreeing over land, rights, language, religion and dress

Another attempt to Indonesianize was Operasi Koteka or Penis Sheath Operation. Boxes of textile ‘modern’ clothing were airdropped to the Dani people, to convince them to move away from their traditional clothing. Some, especially the more modern generations, buckle under the social pressures. 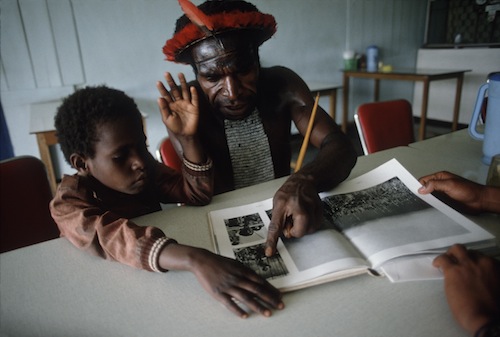 Tourism too has changed the Dani way of life. The uniqueness of their culture, and of course the beauty of the Baliem Valley, has slowly lured tourists to Irian Jaya. The effects this has are various: the cultural interactions with foreigners diluting the Dani’s own culture, or the Dani exaggeration of their culture for economic gain, a term known as “zooification”. Like we see in many tourist hubs, such as Bali, the local people’s focus change on making money through the industry and leave their roots behind. 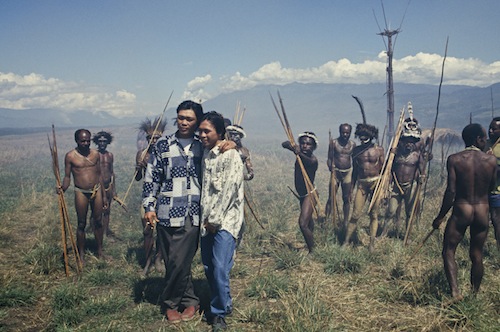 Since the 1970’s mining has taken place in the depths of Irian Jaya, the largest one being Freeport Gold and Copper mine, the largest of its kind in the world. Such operations have brought in thousands of workers, marginalised the Dani people and also caused environmental problems in their land. 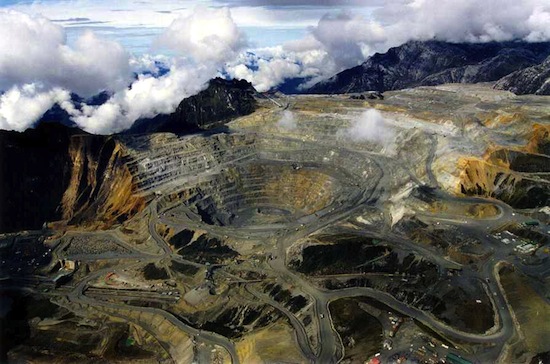 When the town of Wamena was built (only urban area in the Valley), this brought modern structures, economies and societies into the Dani homeland. Here the Dani sell their handicraft, receiving rupiah in exchange, but with Papua having highest prices in Indonesia the Dani still remain poor. 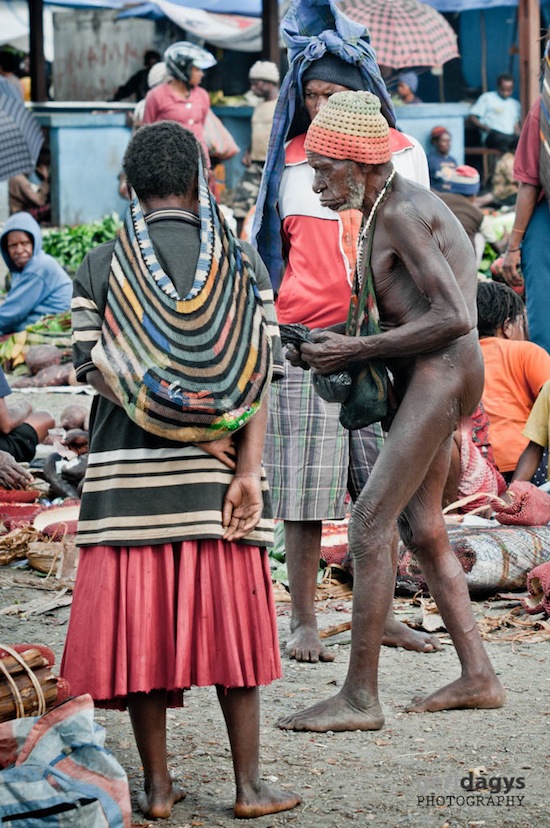 Age-old traditions were changed by new Indonesian laws, with the banning of the ikipalin finger cutting and the culture of tribal wars so central to their culture. An attempt to bring them into the 21st Century. Of course, the 21st Century has it’s problems as well. 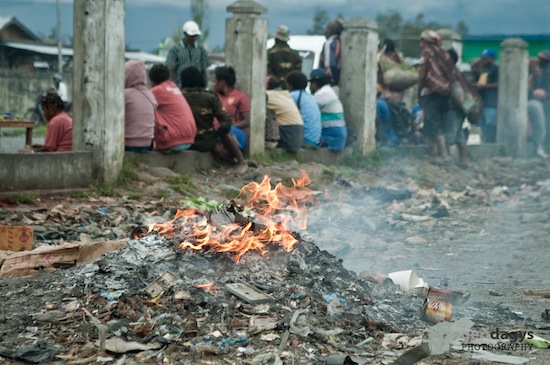 As Papuans continue to fight for autonomy or at least equality, the Indonesian military has a held a large presence in Irian Jaya and Wamena. This has resulted in protests, clashes and many deaths. These politics have certainly affected the lives of the Dani people, whose culture thus comes under pressure. 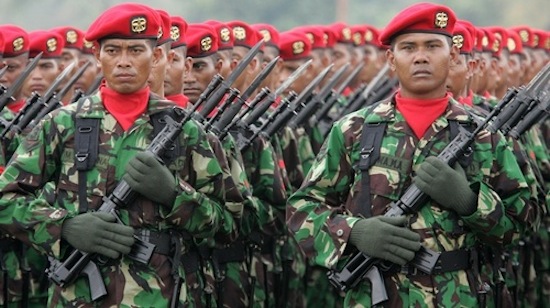 The level of increased exposure to the outside world has meant that the Dani people are no longer the ‘stone-age’ society of decades ago. They are at a crossroads, where modern life and ancient ways intersect. Some roam the streets of the Baliem city of Wamena in their koteka and grass skirts, the perfect juxtaposition of new and old. In the rural areas, they continue to live their lives, but slowly, they are pulled into a 21st-century life, whether they like it or not. Social, political and economic issues become infused into their everyday lives.

Bali’s “Day Of Silence” – How Self-Isolation During COVID-19 Should Be Done
Creating Unity: Comparing US and Indonesia’s Ability to Unite a Massive Nation