It seems silly, but every time Indonesians hear of an Indonesian restaurant “abroad” we tend to get excited. As in, really excited, as if these culinary expansions are a metaphor for us sticking a flag in the land and announcing our official arrival.

At the end of the day, we’re probably just happy that nowadays wherever we go the likelihood of us finding that taste of home is increasing. This includes South Philadelphia. 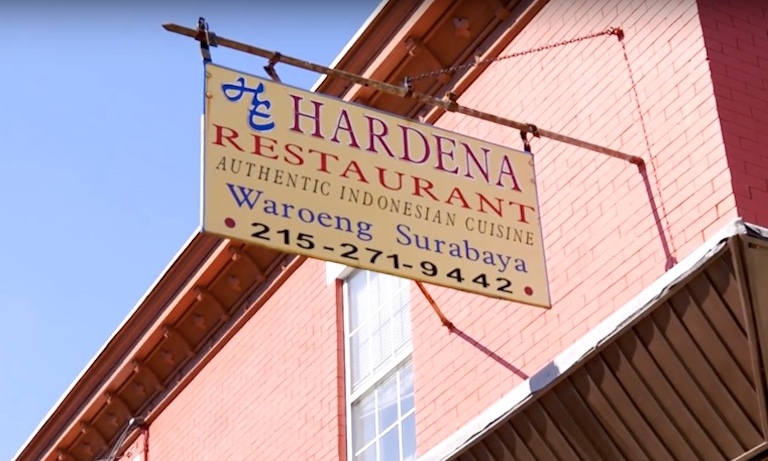 The YouTube Channel Eater caught wind of an authentic Indonesian restaurant called Hardena Restaurant, a self-proclaimed ‘Waroeng Surabaya’, that sits on the unlikely corner of a South Philadelphia street. Whilst the restaurant had in fact been there for 17 years (2001), serving the increasing Asian and Indonesian population as well as adventurous Americans, it’s thanks to the internet we now know that if we ever head to South Philly we can get our share of warung delights.

The host, Lucas Peterson, meets with the daughter of Hardena Warung’s founder Ena Widjojo and goes in for a tasting. What’s awesome is that not only is this an Indonesian restaurant, they even serve their food buffet or “touch screen” style.

When it comes to the food, it’s immediately obvious that this is the real deal. Serving up an authentic array of bites, such as daun singkong, terong balado, semur tahu, bakwan goreng and their specialties of rendang and sate Madura, Hardena seems to be accurately representing food of the archipelago.

It’s great to see Indonesian food being enjoyed around the world, as many of us will know, there are still many people in foreign countries who’ve never heard of us! Hopefully, like Thailand or Vietnam, our cuisine will be our gateway into people’s hearts (through their stomach). Go Hardena!

Watch for yourself. Warning, you may get hungry.