The National Disaster Mitigation Agency (BNPB) has announced that Indonesia is likely to encounter even more of the same natural disasters in 2019.

At a recent press conference, BNPB officials said they predict that the archipelago will be hit by more than 2,500 natural disasters of differing types and severities this year.

Located on the “Ring of Fire,” earthquakes are also expected to be common in Indonesia in 2019, just like in previous years. And, should high-magnitude quakes hit deep in the ocean, Indonesia may continue to be struck by tsunamis.

BNPB Spokesman Sutopo Purwo Nugroho said on Monday, as quoted by Merdeka, “The most dominant will be hydro-meteorological disasters, namely floods, landslides and tornadoes,”, noting that Indonesia is especially prone to those disasters due to deforestation and environmental damage.

Below is a breakdown of the natural disasters in Indonesia in 2018. 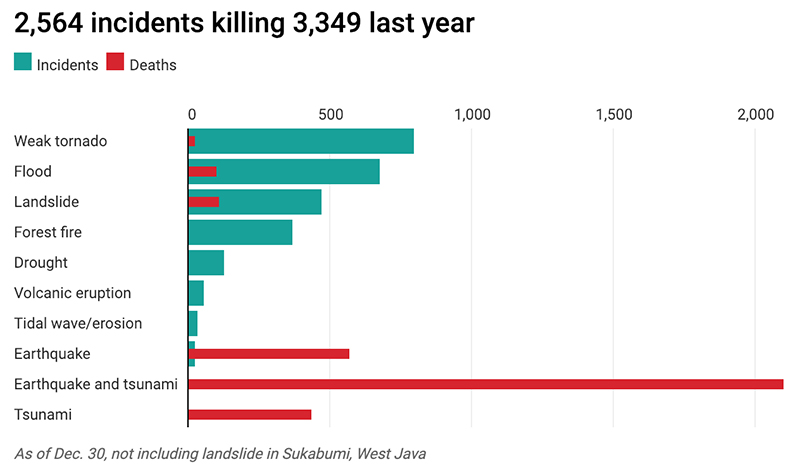 As for the threat of volcanic eruptions, the BNPB said that, out of Indonesia’s 127 volcanoes, only a handful are considered at risk of dangerous activity. Only one volcano — North Sumatra’s Sinabung — is at the highest alert level while several others, including Anak Krakatoa in the Sunda Strait and Bali’s Mount Agung, are also at relatively high alert levels.