More than 100,000 Orangutans have been lost on the island of Borneo over a 16 year period.

According to a landmark study in Current Biology looking at Orangutan populations in Borneo from 1999-2015 told a devastating tale about the state of their natural forest habitat, and what their future holds.

The study holds the usual culprits of illegal logging, land clearance for agriculture, paper, mining and of course, palm oil as the main reasons for their losses.

Only 38 of 64 identified groups contain more than 100 Orangutans…

The lower limit of what can be considered a healthy grouping. 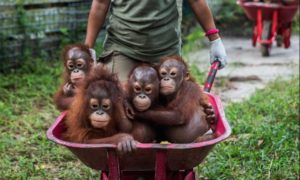 The study would mean that half of Borneo’s orangutans have been killed.

Although WWF places the population at just 105,000. 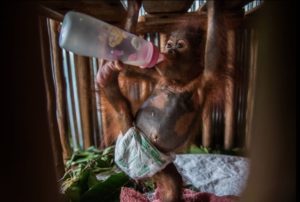 Maria Voigt of the Max Planck Institute and the study’s lead researcher stated:

“The decline in population density was most severe in areas that were deforested or transformed for industrial agriculture, as orangutans struggle to live outside forest areas.Worryingly, however, the largest number of orangutans were lost from areas that remained forested during the study period. This implies a large role of killing.”

The Orangutans and other animals are being targeted by hunters and are being killed in retaliation for crop-raiding farms – a previously underestimated threat to their population. 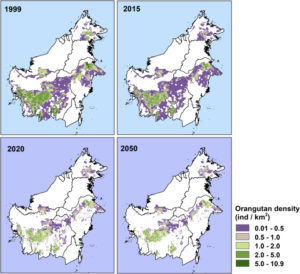 Due to increasing global demands for palm oil to double by 2030 and triple by 2050, amongst other pressures, Borneo’s Orangutan population is projected to lose another 45,000 individuals over the next 35 years.

The Future projected Orangutan declines are based on the direct consequence of habitat loss, not including Orangutan killing for food and in conflict. Therefore, it’s probably underestimated.

Despite the rapid decline of Orangutan populations, profits are up. And when dead Orangutans is good for business, it makes a solution hard to come by. Though not impossible.

According to Emma Keller from WWF, there needs to be a giant leap in consumer pressure on companies to commit to sustainable supply for Palm Oil.

“The big objectives now are to have a complete ban on deforestation and no planting on peat soils.” 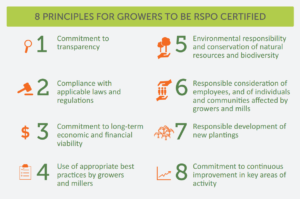 Sure, deforestation may be good short-term economic practice. But there will come a time when the world solves its need for palm oil and Indonesia will have destroyed its seemingly abundant forestry in a matter of decades.

Nothing could be more important than putting sustainability as the primary factor in Palm Oil production, for Orangutans and the future Indonesian economy.

Either that or our critically endangered Orangutan cousins will become permanently extinct for the sake of IndoMie and soap.

Bali’s Mt. Agung Erupts Again – But Is It Over?
Indonesia’s Inconvenient Truth: The Challenge Of A Sinking Jakarta