Jakarta faces an existential crises the likes of which Indonesia has never seen.

Indeed, not since the fabled City of Atlantis has such a great metropolis been threatened with the fate of sinking in the human experience.

The best and most costly solution to date is to build a Giant Seawall around North Jakarta.

Now, building a defence against the ocean would be a political, economic and engineering feet of biblical proportions in any country.

But this is Indonesia.

There are so many things to consider beyond just putting up a wall. 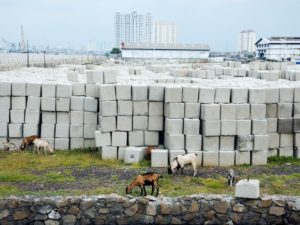 The publication WIRED turned their attention to Indonesia’s capital in a recent article.

There are technical issues that won’t be solved by simply erecting a wall.

“The $42 billion project envisions three stages, starting with strengthening 30 kilometers (18 miles) of existing coastal dams and creating 17 artificial islands. This would be followed by building giant sea walls on the western and eastern sides of the bay.” 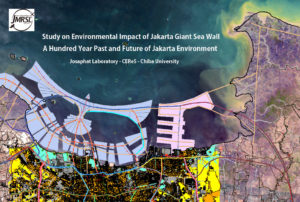 But Heri Andreas, who studies subsidence at the Bandung Institute of Technology in Indonesia, says cost cutting is already being attempted.

The actual scenario being agreed upon is more likely to be a 20-kilometer-long wall that would enclose part of the bay to protect the most vulnerable area, rather than a loop that was intended to be three times as long.

This would buy time for the government to deal with the other areas later.

However, the people that call North Jakarta home, mostly made up of fishing communities, already view the mega project with suspicion.

Muara Angke, a kampung along the north coast, is no stranger to flooding. 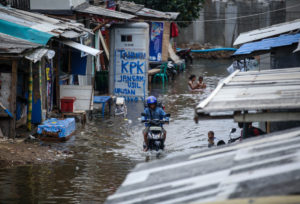 The view of Pandi, a 63-year-old local fisherman, argues that flooding is a fact of life on the waterfront.

He fears a Seawall will effectively end fishing off the coast of North Jakarta. 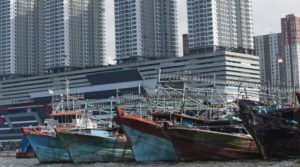 “If we can’t work, we will suffer for a long time. Sinking (below water) is just part of the risk.” 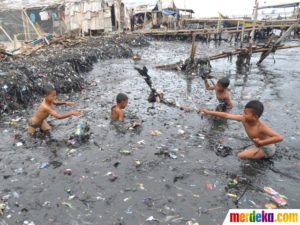 How can you argue with that logic, particularly when it is straight from the residents most affected?

We pump too much groundwater out of the swampy soil that the city is built upon to provide drinking water for the city’s inhabitants.

Jakarta needs to find a way to hydrate its people to prevent 95% of North Jakarta being underwater by 2050. 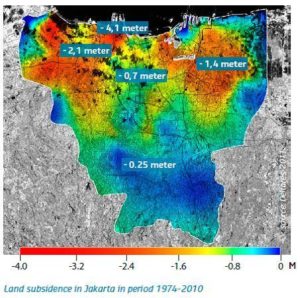 “The big solution is water management, to stop groundwater pumping. But the problem in Jakarta is we’re still struggling to find a replacement. And we’re a developing country, so it makes it more complicated.”

Here is the crux. A Seawall won’t matter if Jakarta keeps sinking.

It will just bring the Seawall down with it.

“Of course if we don’t stop the subsidence, the seawall will go down too.” 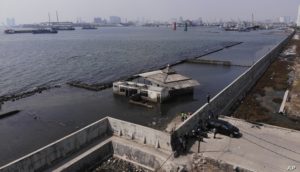 The Great Wall of China can be viewed from space.

If we don’t stop Jakarta from sinking, the Giant Seawall of Jakarta will only be visible from underwater.

A metaphor of our folly for our descendants to remember us by.

We are not talking about keeping out Mongols or Mexicans. We are talking of keeping the entire force of the ocean at bay. Forever.

If we rush this and cut costs on a Seawall, the potential for failure increases exponentially.

Rather than gradual flooding, the potential of a pent up Tsunami waiting to burst through the cracks becomes a constant concern. 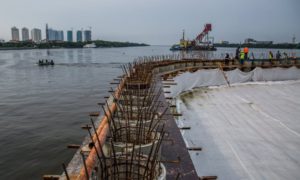 The real battle that is happening here is cultural; Indonesian management foibles that often lack foresight, preparation and responsibility.

The current financial reasoning goes out the window if, for every dollar spent on adaptation, you save between $4 and $10 in disaster recovery efforts.

Jakarta is set to be the first casualty of subsidence in the process of climate catastrophe.

That’s why experts like Heri Andreas are more important than ever.

But it will take more than Indonesia’s best, brightest and bravest to save Indonesia.

It also requires the passion of the people who love Jakarta, for all it’s faults.

Because loving Jakarta is an expertise in it self.

If providing drinking water to all the people that live and commute to Jakarta is the solution, that must be the one we work towards.

Figure out the logistics of that 21st Century Civilizational requirement first, worry about the cost second.

Because, there is no cost cutting when it comes to an existential crisis.