Connect with us
weforum.org

Do you spend your days stuck in traffic in the polluted concrete jungle called Jakarta?

When Zipjet’s 2017 Global Least & Most Stressful Cities Ranking came out, no resident of Jakarta was surprised at the unenviable ranking of the city being considered the world’s 19th most stressful city. Assessing 500 locations around the world, Zipjet collected data relating to the cities themselves, pollution, finance and the citizens. Jakarta performed particularly poorly in the areas of Population Density, Greenspaces, Public Transport, Traffic, Physical Health, and Race Equality.

Stress is perhaps the most underrated inhibitor of happiness. So exactly what do these numbers mean to the people of Jakarta?

Firstly, it’s important just to note what company Jakarta keeps in the undesirable claim as one of the most stressful cities in the world. Other Top 20 cities include:

Bhagdad, Iraq – The war-torn capital that is the epicentre of the “War on Terror” and all the stress that goes with it.

Dakar, Senegal – A capital city rife with street crime, amongst other unpleasantries. 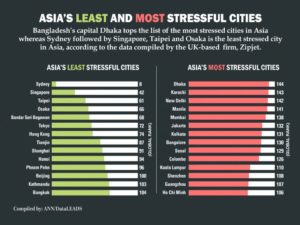 Fortunately, the causes of Jakarta’s stress are nowhere near as out of control. But even to be in the same breath as these cities is enough to cause some anxiety. Because stress is perhaps the most silent hindrance to public health. According to the Mayo Clinic, the symptoms of stress on the individual are wide-ranging:

Common Effects Of Stress On Your Body

Common Effects Of Stress On Your Mood

Lack of motivation or focus

Common Effects Of Stress On Your Behaviour

These changes in attitude are brought on by an increase of “stress chemicals” in the brain, namely cortisol. It also inhibits chemicals like dopamine being released, hence why we turn to food, tobacco or harder substances when we feel the weight of the world on our shoulders. Could this be a major factor as to why 67% of Indonesian males smoke? 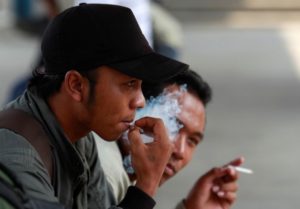 To be fair, there are huge moves to rectify population density, public transport and traffic congestion in Jakarta. Though where our capital scored worst on the index was access to Greenspaces. And the only answer Jarkata has to its lack of vegetation is imitation – as the rise of Jakarta’s “Fake Nature” is a testament to.

Despite the fact that stress in Jakarta is a vital public health issue, it’s almost a miracle that its citizens seem so… chilled. A stress-free way of life has been the casual pursuit of every Jakartan for generations, whatever the obstacle. And it’s going to take a lot more than a poor ranking on a stress index to get us to stop chillin’… 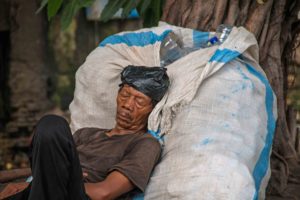 If you are currently feeling the stress of life in Jakarta, or anywhere in the world, try any one of these excellent ways to manage and reduce stress 🙂