The stats are in – Jakartans love sausages more than any other region in Indonesia.

According to the Central Bureau of Statistics, the people of Jakarta eat 15 grams of processed meat per week. Processed meat includes the likes of chicken nuggets, corned beef and, of course, Sosis. Other regions considered high consumers of processed sausages are Riau (15 grams), Banten (12 grams) and Jawa Barat (9 grams). The more remote, rural and central regions of Indonesia understandably eat less processed foods – Gorontalo in North Sulawesi, eats only 0.2 grams of processed meat – as their dietary opportunities are different.

Parts of Indonesia are clearly fans of a sausage, but what does the high intake of processed meats mean for the Indonesian’s that like to indulge in them? 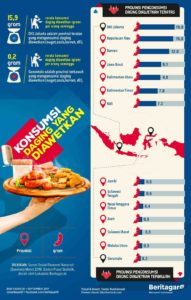 Processed foods are incredibly high in salt, sodium and saturated fats. This can be detrimental to one’s health for a number of reasons: 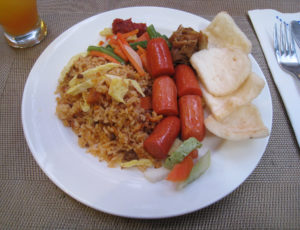 The annoying thing is… they taste pretty good!

These statistics are evidence of an increased supply, as Indonesia, along with India, has the highest growth of processed food intake in the world. Though the science is in. Many people in the more developed areas of Indonesia are consuming more processed food than is healthy.

So why not do your body a favour?

Next time you go out to eat, don’t go for the Sosis option – have a Gado Gado!

The State Of The Orang Rimba In Indonesia
Mesmerising Video Of Mt. Sinabung Erupting… Again.