Indonesia could be on the verge of implementing the most innovative waste management idea of all time.

A 700m “Plastic Road” – where plastic is melted and added to tar to make roads – is already operational at Udayana University in Bali. Incorporating plastic into roads can cut construction and maintenance costs by 7-10% and increase the stability of the road by 40%. Such improvement in road efficiency is exactly why the technique has already been commissioned for Javanese roads in Jakarta, Bekasi and Surabaya.

Could this also be the win that the Indonesian environment has been waiting for? 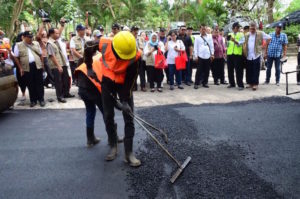 Firstly, lets look at this problem in the context of plastic waste.

Indonesia uses enough plastic straws to be placed end-to-end around the Earth, every day.

Indonesia is second only to China for dumping plastic into the Ocean.

By 2019, plastic waste in Indonesia will have reached 9.52 million tons. 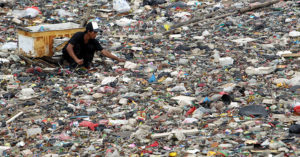 It could be enough to make you think that we might as well give up. But fear not. One man’s rubbish is another man’s treasure. According to Safri Burhannudin, a deputy minister at the Ministry for Maritime Affairs:

“Every kilometer of road, with a width of 7 meters, requires between 2.5 to 5 tonnes of mixed plastic waste.”

Creating “Plastic Roads” is a joint effort between the Ministry for Maritime Affairs and the Public Works and Housing. The Indonesian Plastic Recycling Association (Adupi) is already collecting the plastic to apply the concept in 16 major Indonesian cities.

This means that instead of using our oceans as our garbage dump, new roads could become the bins of tomorrow…

Too Good To Be True?

India has been the forerunner of “Plastic Road” projects. Since 2002, India has already created 21,000 km of roads using the same technique, and claim that they have proved remarkably durable in the face of harsh weather and flooding.

However, the director of the Bio-science and Biotechnology Development Foundation (YPBB) in Surabaya David Sutasurya has been doing his due diligence. He has contacted activists in India, such as Dharmesh Shah of Global Alliance for Incinerator Alternatives (GAIA) to find out what side effects there may be, discovering some crucial speed bumps. 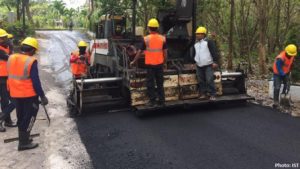 Among other issues, a potential problem with this technology is micro-plastic pollution. Plastics are melted to form a sticky coating over bitumen in the road, but don’t actually break down. When sunshine and rain whether the road over time, the plastic can degrade into micro-particles that end up in the ecosystem… exactly as our plastic waste does now.

While there are obvious hurdles to overcome and rigorous research to be conducted before widespread implementation, the potential of “Plastic Roads” can’t be ignored. It is hoped that the issue of micro-plastic pollution can be overcome as this technology is developed further.

Right now, the environmental crisis we face seems to have made Indonesian single-use plastic into an inexhaustible resource. But “Plastic Roads” – combined with concerted reduction of plastic waste – could turn Indonesia from one of the worlds biggest culprits, to the worlds leading innovator in waste reduction.

And the transformation could be here sooner than we think.