This could go down as the most bizarre trend of 2016.

Twitter, Facebook, Youtube, mainstream media… the world is going crazy over the viral videos going by “Om Telolet Om!”, a trend which can only have started in Indonesia and has quickly confused the globe. If you’re still scratching your head over this phenomenon, here’s an explanation on what Om Telolet Om is, and why it’s so big.

If you’re still scratching your head over this phenomenon, here’s an explanation on what Om Telolet Om is, and why it’s so big.

Let’s quickly break down the literal meaning of the words (for those who don’t know Indonesian). Om is a way of referencing an older, male member of society similar to an uncle or in some cases sir.
Telolet is an onomatopoeic reference to the sound of Indonesian bus horns – not the normal ones, but the fun, song-like horns not too different from what you might expect from an American long-haul truck.

Together the phrase “Om Telolet Om” is a call to the bus driver (Om!) to toot his funny horn as he drives past (telolet): “Sir, Beep Sir!” 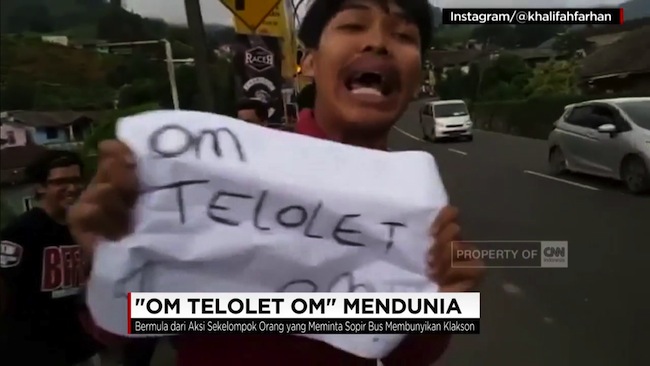 It all began on Facebook when a kind of “Telolet Challenge” circulated amongst young Indonesians – the challenge saw a bunch of youths with too much time on their hands, hanging by roadsides shouting “Om, Telolet Om” to big buses as they drove past in the hope that the bus driver would toot his musical horn.

Montage of loads of Om Telolet Om in action – just see how much people love it!
The funny thing is, according to the Bismania (Busmania) Community (yes, that exists), the telolet sound has been around for more than a decade, but only now has its popularity exploded…

As Indonesia still has the largest Twitter population in the world, and with everyone so active on social media, it was easy for the hashtag to trend worldwide. Then, on 20 December 2016, it was caught on by international DJ’s which made it explode worldwide, causing a flurry of complete confusion amongst non-Indonesians.

From re-tweets to remixes, things quickly escalated into telolet mayhem. The words Om Telolet Om has been used over 445,000 times on Twitter already.. Here’s a club remix of Telolet by DJ Firebeatz:

What is already being called the best meme to close 2016, Indonesia has made a huge contribution to this year of strife, despair and discomfort. Why? Well, this ridiculous trend (and yes, it is so ridiculous, but we love it) sees Indonesians literally cracking up with joy just by a simple telolet from passing bus drivers. It’s an act of pure happiness and enjoyment from such a simple source! Perhaps this is what the world clung onto and why -even though they were incredibly confused- everyone loved it.

Thank you social media, Indonesian youth, Busmania… you may have helped 2016 end on a “high note”.