Researchers have come to the conclusion that we in Indonesia have always known.

Indonesia Is The World’s Most Chilled Out Country. 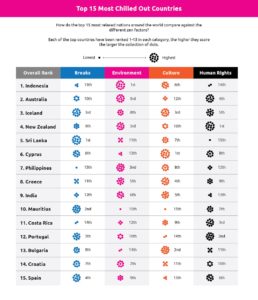 Researchers devised the list of most relaxing countries based on a number of factors, including:

The personal rights of citizens

The number of public holidays

The number of spa retreats

With 17,000 islands creating 54,700 miles of coastline, a relaxing beach is never far for the 280 million people that call Indonesia home.

The study also found that:

Indonesia Has Over 186 Green Spaces

(Outside of Greater Jakarta, obviously)

An Average Temperature Of 25 C

This makes it perfect for surfurs to chase the waves, or just working on that base tan.

Affordable pampering can fit into the weekly schedule, no problem.

Indeed, the brilliance of having unity in a culturally diverse archipelago, is we celebrate every single God-given holiday, whatever the religion may be.

Sure, we may have some stress inducing aspects that may have slipped under the radar of the researchers.

But we invented some frustrating concepts like “elastic time” – Jam Karet – purely because we are so relaxed.

But we’re a bit too chilled to celebrate.