How did the first Australians get to Australia?

After the first homo sapiens (modern humans) reached Indonesia, they had arrived in Australia at least 65,000 years ago. This also means that the first people to Australia are the first known seafaring humans. It has also made the debate of the first Australian’s route archeologically contentious.

But with these new findings from the journal Quaternary Science Review – new light has been shed on the first Australian’s Island Hopping adventures through Indonesia.

All this occurred during an ice age lasting from 71,000-59,000 years ago. A time where the world looked very different…

Back then there was no Indonesia and Australia as we know it.

There were Sunda and Sahul

Sunda formed part of what is now South East Asia.

Sahul was formed by modern Australia and New Guinea. 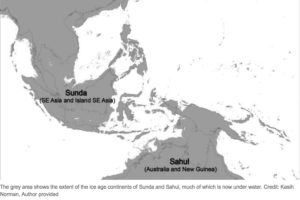 The prevailing belief was that the first Australians came through Indonesia’s northern islands and arrived at the New Guinea tip of Sahul. With the closest distance between the Sunda and New Guinea coastlines around 90km, the early maritime adventurers would have been able to see the next island ahead of them as they hopped one to the other.

Though it was hypothesized, but never confirmed, that a route through Timor was possible once upon a time.

At the end of the last ice age 18,000 years ago, the rise in global ocean levels flooded coastal areas across the world. This sunk Sunda and gave birth to many of Indonesia’s 17,000 islands. It also split the continent of Sahul into Australia and New Guinea

This means that the importance of understanding the first people to have made landfall on Australia is probably underwater.

But thanks to new computer analyses used in a research paper in the Quaternary Science Review, researchers could provide proper data on the regions of the ocean floor that were once above sea level.

The dry land and islands of 50,000 + years ago have emerged from their watery grave.

According to lead researcher Kasih Norman:

“The powerful computer programs we used work out what a person standing at a particular location can see in a 360-degree arc around them, all the way to their horizon.” 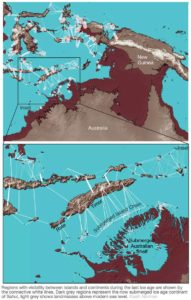 When considering the land and island make-up of the past, there would have been a constellation of islands that were visible, one-by-one, all the way to the North West Coast of modern Australia.

“We discovered that in the deep past (between 70,000 to 60,000 years ago, and potentially for much longer), people could see from the Indonesian islands of Timor and Rote to a now drowned island chain in the Timor Sea.”

An island chain now 100m below the Timor Sea likely acted as the first stepping-stones for Australia’s original human conquerors.

phys.org | The view from Indonesia’s Rote Island towards Australia

These findings help solve the mystery of why Australia’s most ancient sites of human occupation lie in Northwest Australia, at places like Madjedbebe, Nauwalabila and Boodie Cave.

While we may be getting closer to understanding how the first Australians arrived through Indonesia, the origins of how the first homo sapien explorers arrived in Indonesia remains more elusive.

But researchers are taking the same stepping stones backward through Rote and Timor in the hopes of discovering the Journey of the first Indonesians.

Historical Footage Of Sukarno’s Inauguration As Indonesia’s First President
Ambon’s Child Soldiers: “I Can’t Remember How Many I Killed… Aged 10”