Connect with us
Photo: Fredography

In March 2017, a strange piece of footage started circulating on conspiracy theory web sites along with a variety of titles and claims, such as “Human or not? Bikers in Indonesia film a mysterious humanoid creature,” and “Real Hobbit is Accidentally Caught On Camera in Aceh Forest.”

The video, which reportedly shows a naked man spooking a group of dirt bikers before disappearing into a field of tall grass, was originally uploaded to the YouTube page “Fredography” on 22 March 2017:

Although the video’s description provided a general location for the footage — the Aceh region of Indonesia — the uploader was not willing to provide further information.

So what exactly does this video show? You decide! 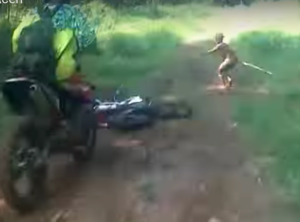