Mount Agung, located in Bali’s Karangasem regency, has been updated to level IV status, which means it could erupt anytime.  An exclusion zone of 9 to 12 kilometers has been declared and over 144,000 people have been evacuated from villages inside the “danger zone.” Mount Agung last erupted in 1963.

Jro Mangku summited Mount Agung with Ketut Ngeteg. He mentioned that the climb to the top took 10 hours. Volcanology and Geological Disaster Mitigation Center (PVMBG) is strictly prohibiting people from visiting the danger zone. The priest’s companion Ketut Ngeteg shot a video of the smoking volcanic crater. He later uploaded it on Facebook and it went viral within minutes.

The priest gave his reason for climbing the volcano, “I know it’s forbidden to go up to the top, but it’s really God who rules everything. I only went up to show my devotion. I had to go up to the top to carry out my sacred duties.” 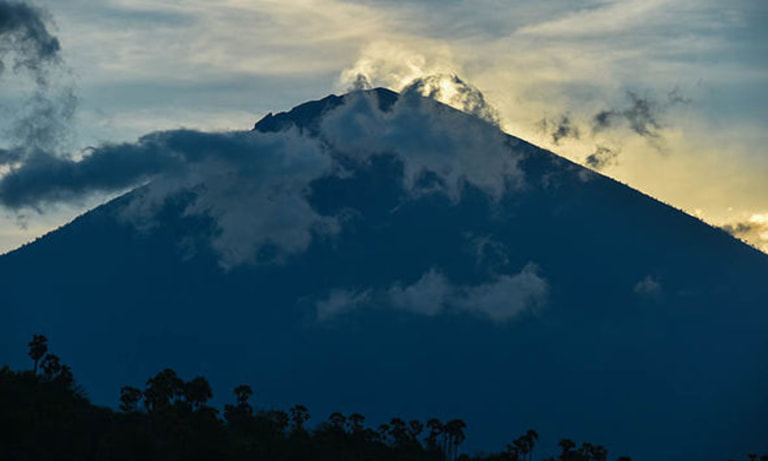 Mount Agung is of huge spiritual significance to the Balinese. Balinese legend has it that Agung was created when the Hindu God Pashupati split Mount Meru (the spiritual axis of the universe) and formed Mount Agung. It is the highest mountain in Bali and fifth highest volcano in Indonesia. Besakih Temple, the largest and most important temple in Bali, sits in the shadows of Mount Agung. Despite Besakih’s position inside the danger zone, the governor and some villagers performed special full moon rituals last Thursday.

Another Frenchman climbed Mount Agung last Friday and posted a video of himself on social media outlets. To prevent further such incidences, local authorities have set up four 24-hour posts around the volcano. In addition, some 137 officers will patrol the disaster-prone area to control the movement of people.