Episode 3, Season 12 of CNN’s show ‘Parts Unknown’ with Anthony Bourdain will be exploring Indonesia. The episode will be aired 7th October 2018, 9PM PET (or 10am, 8th October Jakarta time).

TV;s most famous and popular food icon, Anthony Bourdain, passed away on June 8, 2018. His passing shocked all of his fans, followers and the food and travel enthusiasts who’s eyes were opened by his many shows exploring global cuisine. 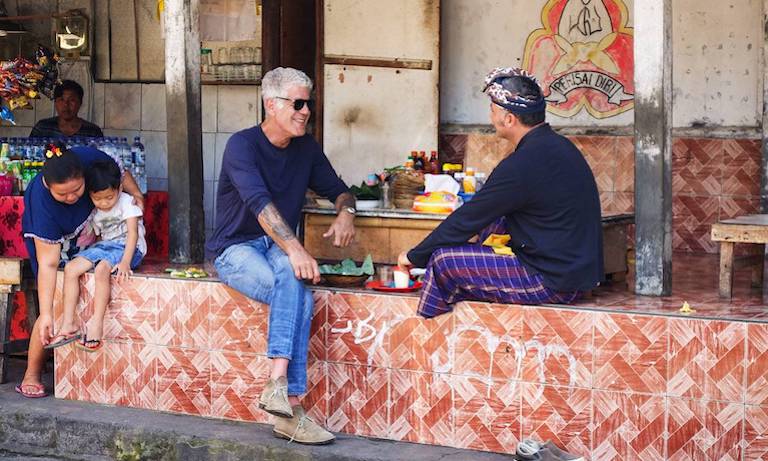 Tony sharing a laugh with Kadek before sporting the sarongs. (Source: explorepartsunknown.com)

Before his untimely death, Bourdain was filming the 12th season of the CNN show “Parts Unknown”, in which Bourdain continues to do what he does best: exploring little-known places and cultures through food and discussion – with Bourdain flair, of course. In Episode 3 Season 12, released posthumously, Anthony Bourdain returns to Indonesia to rediscover the country he came to visit in 2006 for his previous show “No Reservations”.

So, what do we have to expect from this episode exploring the world’s fourth largest country, as Bourdain describes it?

“A shadow puppet performance provides an entry into understanding Indonesia, a country comprised of thousands of islands whose people endured political turmoil, and one in which, Bourdain discovers, food is the great unifier. In this fourth largest country in the world, every area has it’s own unique traditions. In Jakarta, Bourdain eats at a Padang Restaurant where nearly every menu item comes to the table; while in Bali he visits the beach, commenting on yoga before joining in a traditional Balinese Funeral ceremony.” 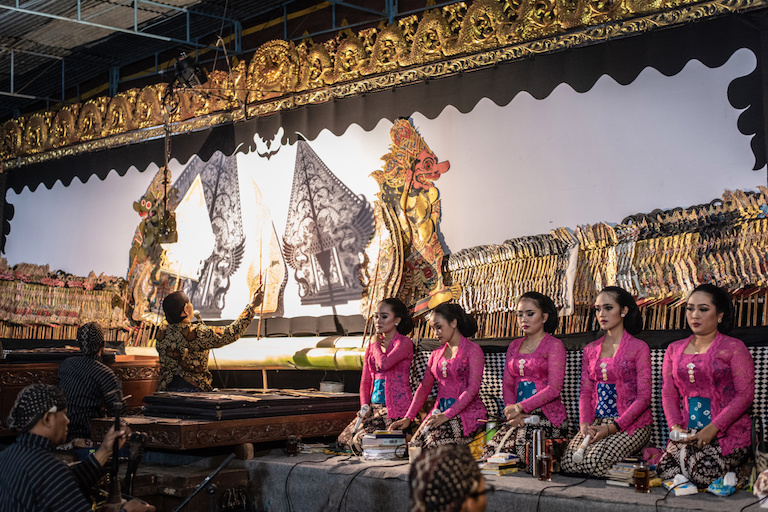 From the several clips (shown below) released to tease the episode, we can pick up a few of Bourdain’s talking points.

Indonesia is incredibly diverse. If anything can help to visualise our diversity, it is definitely our cuisine. From Aceh to Lampung, Jakarta to Banyuwangi, Bali to Jayapura, every region has its own speciality cuisine. This stems from the original adat of each area which makes the country so incredibly unique as a whole.

Tolerance is on the decline. One conversation Bourdain has whilst chowing down in a local Padang Restaurant eating fried lung is how people in the country are becoming less tolerant, especially when it comes to beliefs/religion.

Development destroying paradise. Bourdain returns to Bali and sees how development has grown unencumbered and uncontrolled and has changed the island he once loved (and once said jokingly he might retire there). He says “Bali… enchanted wonderland, or post- Eat Pray Love apocalypse?”

Finally, and more positively, food is Indonesia’s great unifier. There is nothing that excites all Indonesians more than food; we forget how culturally diverse our “menu” has become in the country and really this connects all of us together. “Yuk, cobain soto betawi baru di Jl.Fatmawati ntar malam!”, “gile, sudah lama gue ga makan rendang loh” or “gue pengen ke Aceh sih, mau coba Ayam Tangkap yang authentic.”

It’s so true. Like we explored how the Warung bridges the gap between rich and poor in Indonesia in a previous article, our regional cuisines connects all of us from East to West, North to South. 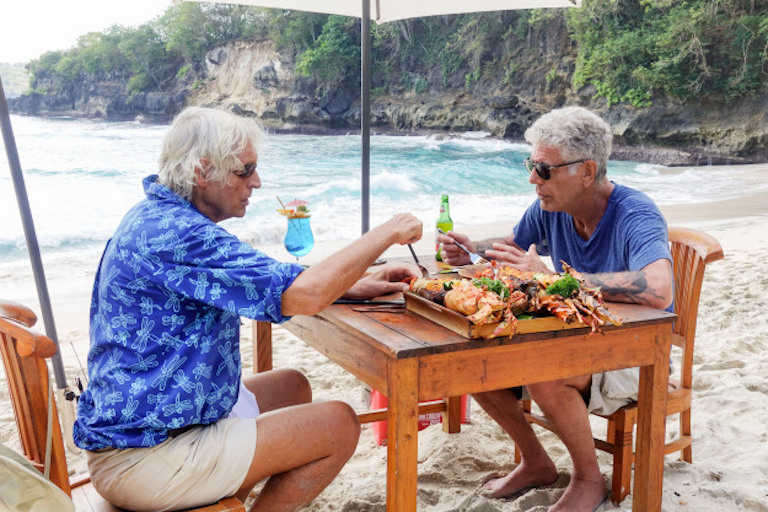 A discussion about Balinese funerals commences over an epic meal with Sir Lawrence Blair. (Source: explorepartsunknown.com)

Whilst watching the episode is likely to have us feeling sad at the loss of Bourdain, he has also left us with a beautiful gift in his final season. With his great humour, insight and honesty, Bourdain will no doubt make us look back on ourselves, bring about realisations that we as a country refuse to grasp and finally he will remind us of what amazing things Indonesia has – and therefore must not take for granted.

Food, deep conversations with interesting guests (including Sir Lawrence Blair from Ring of Fire), and truly breathtaking cinematography, this is an episode of Parts Unknown you should not miss.

The episode will be aired 7th October 2018, 9PM PET (or 10am, 8th October Jakarta time) on CNN. Head to https://explorepartsunknown.com/destination/indonesia/ for a fully interactive experience and information.