I sat down to talk to Tracy Bantleman and Sisca Tijong, the wives of two men currently on trial for the alleged child abuse at Jakarta Intercultural School, Indonesia.

It is 10:00 a.m. on a Tuesday morning and today’s session in the child abuse trial of Neil Bantleman and Ferdi Tjiong has yet to commence. This is not unusual, and such it seems is the nature of this trial that every day in court is as unpredictable as its starting time, including the dubious account of abuse which includes a magic hypnotic stone and secret hidden rooms within Jakarta Intercultural School (where both Messrs. Bantleman and Tjiong work).

Inside the hushed courtroom, a mere few wooden rows back from where their husbands sit before the currently vacant judge’s chairs, are Tracy Bantleman and Sisca Tjiong. They nestle close to one another, talking quietly in solidarity and comfort. Every so often, they glance up towards the bench; waiting for the moment the judges enter at which time they stand up, politely nod to the judges and leave. Under Indonesian law, the court is closed; even Tracy and Sisca are shut out from the proceedings that will ultimately determine the fate of their families.

Here is our exclusive interview with Tracey Bantleman and Sisca Tijong…

LS: First off, what would you say is your relationship to Indonesia, Tracy? How long have you and Neil lived here?
TB: ‘This is my fifth year. The Indonesian community is so typically warm and welcoming, and the culture is so rich. There was no reason to leave; the school was a fantastic place to work, we have a lot of great personal relationships within the community… And we were able to do a lot of work within the service community, which we felt was important.’ 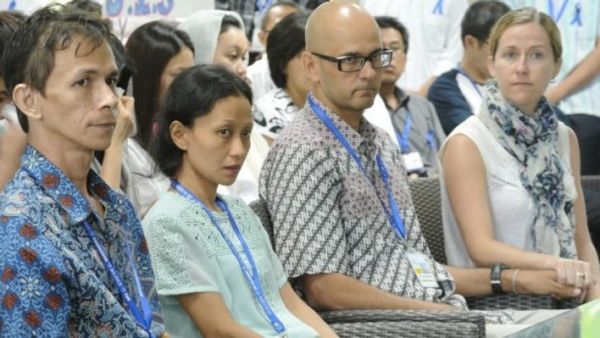 LS: What sort of service work were you doing?
TB: ‘Neil was the school’s service coordinator, so we were involved in everything from Habitat for Humanity to Red Nose Day, Sekolah Kami, XS Baggage… And all that felt good – like we were doing our work for humanity. Indonesia is a place we could do that and see the effect. It was different than back home in Canada, where you write a cheque every year to Save the Children – that’s one thing, and it’s important. But to actually do and have hands-on service at that level – it’s more rewarding.’

LS: And how is your Bahasa Indonesian? It must be especially hard for both of you in terms of the case, considering the language barrier.
TB: ‘I only speak a little Bahasa Indonesia, and Neil as well. The challenge is definitely in the courtroom, fully for Neil, to wholly comprehend what is going on, even with the translator.’ 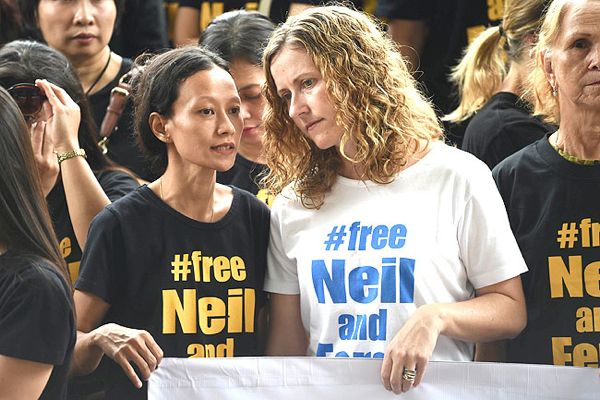 LS: This may be a challenging question to answer, but what’s been the most difficult thing for you, and for Neil?
TB: ‘It’s been very difficult to even have these allegations made against you as a teacher, knowing that what you stand for is to help young children feel safe, and be able to grow under your supervision. To have an allegation like that made is so demoralising because it attacks not only you but also the profession and its integrity. It’s so disappointing that this is how we are being treated on a basic human level.’ 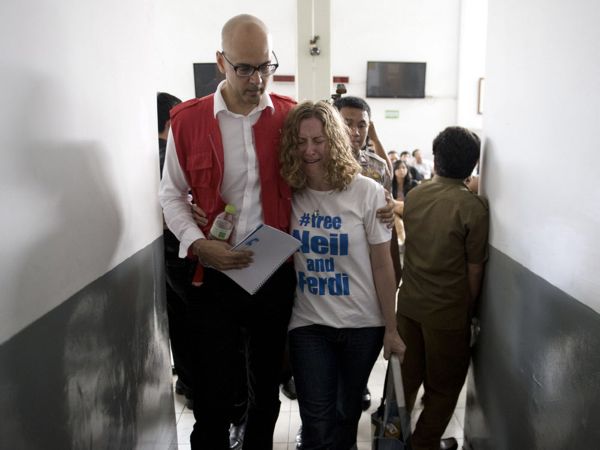 Canada’s Neil Bantleman (L) comforts his wife Tracy after attending his trial in Jakarta on December 16, 2014. Bantleman and Ferdinand Tjiong deny sexually assaulting children at the Jakarta International School (JIS), which has long been favoured by expatriates and wealthy Indonesians in the capital but is now facing the worst crisis in its 60-year history. AFP PHOTO / Bay ISMOYOBAY ISMOYO/AFP/Getty Images

LS: How much time do you and Sisca get with Neil and Ferdi in Cipinang Prison?
TB: ‘We get about an hour to ninety minutes a day in the morning, and then the same in the afternoon. And we are there, or here [at the courthouse] every day.’ 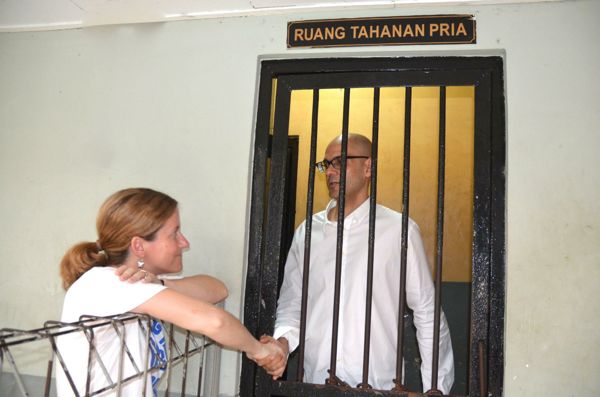 LS: If you had to name the one aspect of the case that, in the eyes of an observer, removes any and all doubt regarding Neil and Ferdi’s innocence, what would that be? What makes this whole thing impossible?
TB: ‘The allegations are just so illogical! That’s what makes it impossible. Just the fact that the ISS cleaners, and Neil and Ferdi, systematically and repetitively abused children during school hours. That they all worked together is impossible.
‘We have a lot of things against us, you know. Challenging things. And people will make their mind up really early on [about these sorts of cases].’ 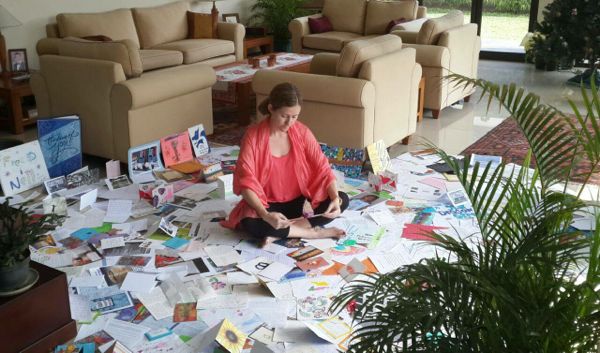 LS: What are some of the obstacles you’ve faced so far?
TB: ‘Neil and Ferdi were detained and held without any evidence; they were put through highly invasive medicals without legal counsel. Now they are on trial, and there is still no credible evidence against them. All of these things make you feel like this case has been engineered, because people are afraid they will be exposed for things that happened as early on as the cleaners’ case and Azwar’s death (one of ISS cleaners employed by JIS and accused of child abuse, who died under suspicious circumstances while in police custody).

LS: And what about for you, Sisca. What has been most difficult?
Sisca exhales deeply and shakes her head. She is unsure of how to even begin. ST: ‘Everything…Just the shock of it all. And the fear of what will happen. This is my husband – just imagine – my husband, the father of my children, accused of being a paedophile? I see it on the news, and I can’t fathom it. The feeling is just… there are no words for it. The shame and embarrassment of these false accusations, but most of all, the fear.’ 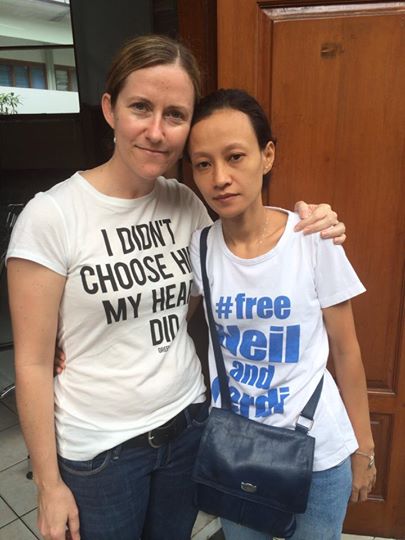 LS: How is Ferdi?
ST: He is well, and safe, but in terms of his mental health, I worry. He and Neil have had to undergo so many things for a crime they didn’t commit, a crime they would both never in their lives commit! Their job is to work with children, and they would never harm them. And yet they find themselves in jail. They have experienced attacks on their humanity and undergone examination after examination. And I see in my husband the effects of this trauma. He has asked me, ‘What will you do about the children if [I am convicted]?’ and the question is too frightening to think about.’
‘When he was detained at the Police Station, he remained strong. Perhaps because he thought, “This nightmare will end, there is no evidence, and after four months (the maximum amount of time in Indonesia that the police can detain someone before having to either free or indict them) we will be released.” But once they were indicted and moved to Cipinang, I saw in both Neil and Ferdi a growing frustration and fear.’ 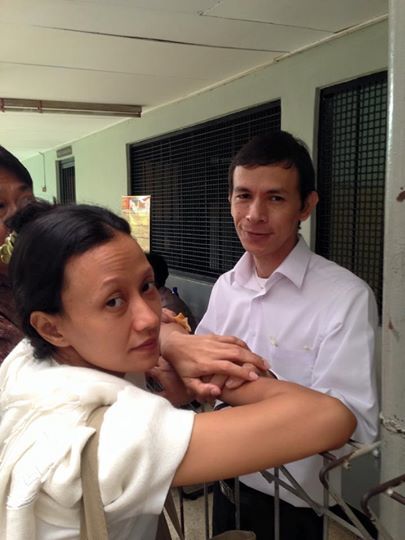 LS: In some ways, it must be a source of courage and comfort for both Neil and Ferdi to be in this together.
Sisca nods her head vigorously, and a rare smile plays across her face.

ST: ‘Yes. They give strength to one another.’

LS: What does the support mean to you, from the people that come here to the courthouse every day?
ST: It makes me happy, and I think it means a lot to Neil and Ferdi. It makes them feel that they are not forgotten. Ferdi especially, I know he fears that people will become discouraged, and forget his plight. To realise that people are thinking of him is a great comfort. It also shows as Tracy said, that so many people firmly believe in their innocence. We know that people are working, schools are in session, and yet they still make the effort to come. It means a lot. 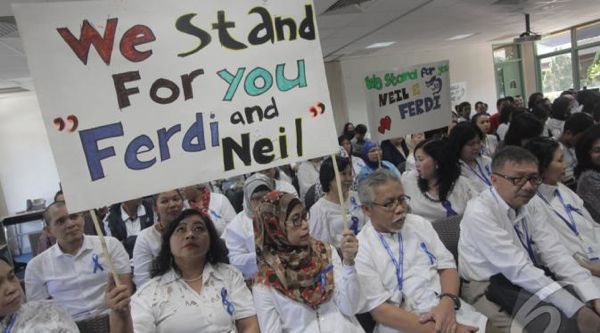 LS: What have you told your children? How old are they?
ST: They are 6 and 9, so it’s hard. In terms of the case, I’ve kept it… simple. I worry about telling them the truth, but at the same time I’ve tried to explain it to them as best I can. I’ve told them that their father works at a school, and a student has said that Ferdi has hurt him, so the police have called their father in to get to the truth of the matter.
They are still young, and to tell them more would be too difficult. But they see the support Ferdi receives, how his colleagues and friends have rallied around him, and I think that helps immeasurably. Our children remain positive about it all, and they, of course, believe in their father’s innocence. 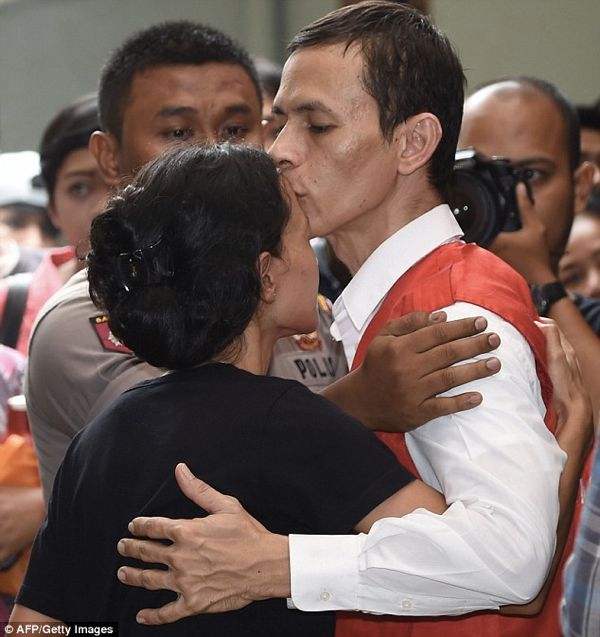 LS: And how are you?
At this, Sisca laughs and then sighs resignedly.
ST: ‘I try to keep going, day by day.’ She pauses, and tears fill her eyes. “I’m sorry. It’s just when I am asked that it’s so hard for my family… I could never have imagined something like this, let alone believe it is actually happening. The world is learning that, here in Indonesia, you cannot trust in the law and due process.”
There is a sadness in her eyes, a slow fading from hope to fear that one can see she is fighting to prevent. Tracy’s gaze beside her, however, remains firm, prepared to answer any question with adept resilience.

LS: There have been vigils held at International Schools across the world, as well as continued support at the courthouse. What does this mean to you, Tracy, and to Sisca, Neil and Ferdi?
TB: It just continues to show that there is a large community of people who inherently know, just by looking at the facts, that [the allegations] are untrue. And by having been a part of the community, inside the school during the day, knowing how the school works, aware that these things are impossible. It just… can’t happen. It wouldn’t happen.
Tracy’s tone is one of frustration and disbelief, and she wears her anguish openly on her face. Yet there is a steely determination too. 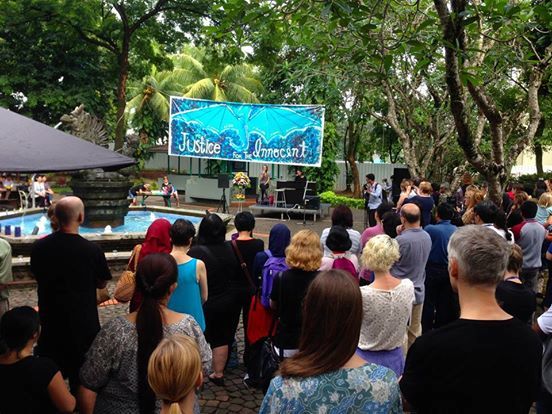 LS: Finally, how can people help, both here in Indonesia and abroad?
TB: Coming to support Neil and Ferdi is essential. People need to speak about the case, about the illogical allegations that are being made, and the ridiculous nature of the allegations. To tweet about it, to write about it, to read about it and to be informed because there are key pieces of evidence that are going to come forward soon that are critical to the case, that people need to know. And to continue to stand for human rights, in all aspects of their life. Because this is, at the core, a human rights issue.

20 Photos Of Bali’s Terrifying Ngrupuk Parade
The Craziest Vespa Modifications You Will Ever See!