We’re expert rule breakers and we know how to tick off our fellow motorist. Does it help us get to where we want to go any faster? Who knows, we’ll try anyway.

These are the 22 things we should expect to see on Indonesian roads.

Age really means nothing on the streets of Indonesia. At some stage, you’ll come across a young teenager behind the wheel of a bus, or perhaps a 4-year-old girl taking her dad’s motorbike to kindergarten in the morning. 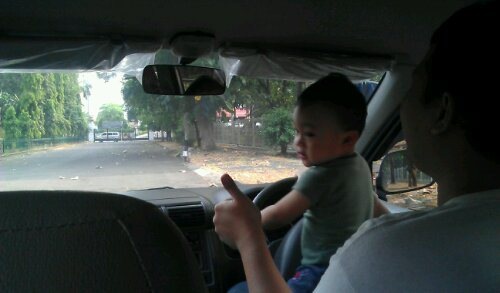 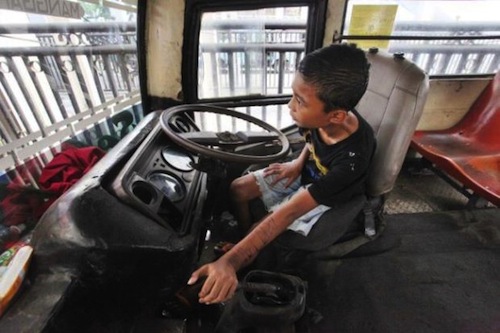 It’s a free country, right? Why should one be tied down to these ‘lines’ and ‘rules’? 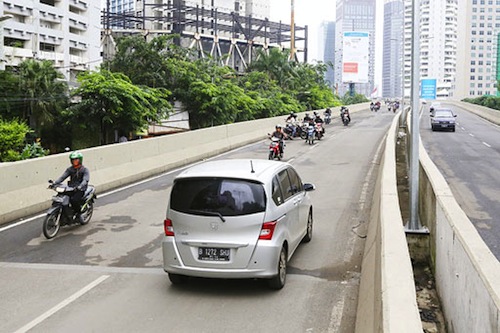 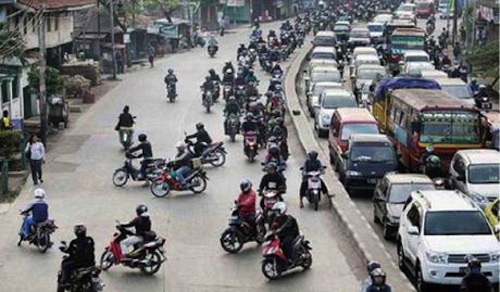 When you’re driving behind a Kopaja or Angkot, it’s probably best to keep one foot ready on the brake. Seriously, who knows when these guys will stop?!  You have to hand it to them though, they’re experts at not caring about what you or anyone else thinks. That’s some strong self-confidence. 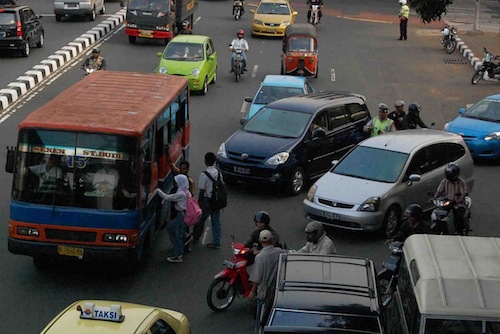 We are all about being social in Indonesia, so if you’re not calling/texting/tweeting/Instagramming/Facebooking/pathing/pinning or something whilst you’re driving, you’re falling behind.

I mean, even the cops know that. 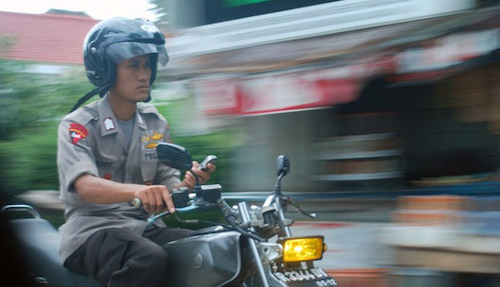 In the epic poem “Divine Comedy“, by 14th-century writer Dante Alighieri, the writer describes the 9 layers of hell one goes through after death – if he was alive in Indonesia in this day and age, he would very likely include an Indonesian roundabout and make it layer number 10. 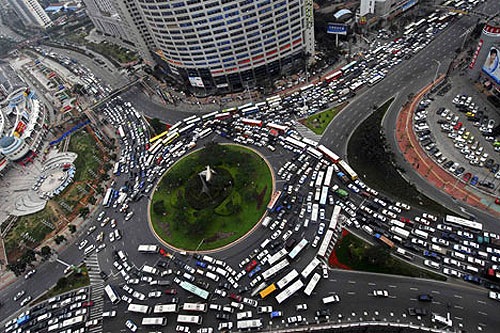 Somehow, despite how fast you are going, a pedestrian can step out onto the road with a single hand stretched out towards you, and your vehicle will come to an abrupt stop before hitting him or her. Pedestrians remain unscathed in the country, thanks to this wizardry. 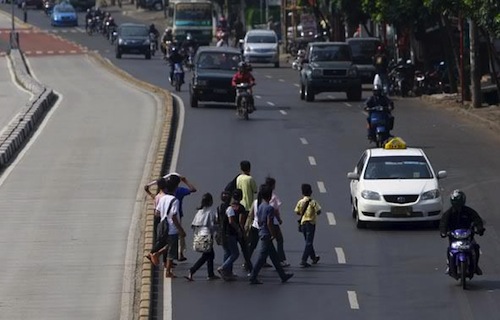 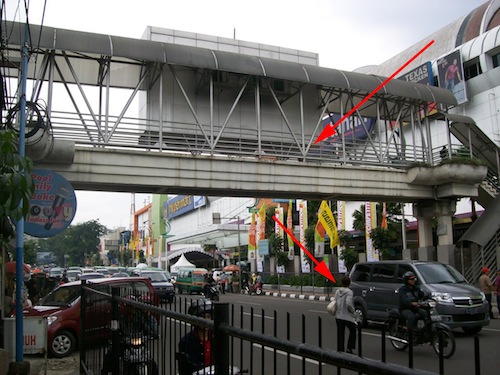 If you’re a white person on the Indonesian roads and you follow the rules and drive carefully, just remember that whatever happens, you’re wrong. Sorry. 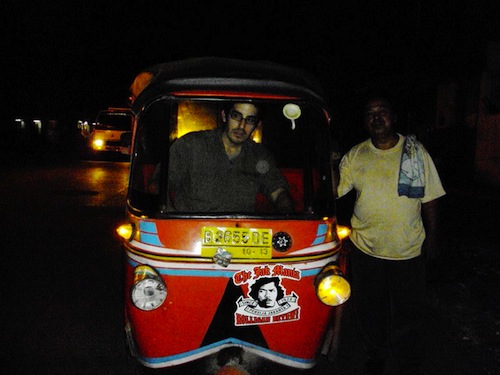 8) Toll Roads = You pay to sit in traffic

Unlike other countries where people pay a premium to escape the frustration of the normal roads and get onto the highway, in Indonesia you actually pay (and quite a lot nowadays) so that you can sit in the same amount of traffic, if not even more! Think about it as a theme park, but the ride is just really, really slow… 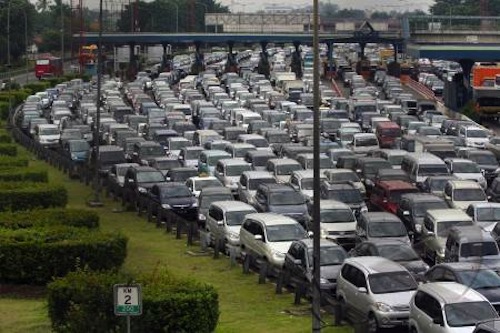 9) Turning into a lane is different…

Rather than going across a road and then into your desired lane quickly, we in Indonesia find that it’s somehow better to drive in the opposite direction for as long as possible until we find a way into our own lane, at the same blocking oncoming traffic and annoying off a lot of people. 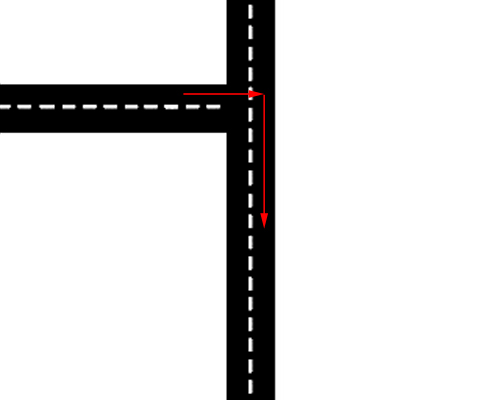 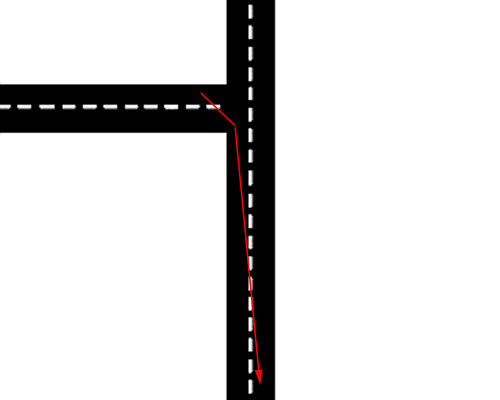 Another common sight on Indonesian roads is the ‘motorbike meeting’. People seem to love having a quick chat on the roads. We never know what they’re talking about – it could be some local gossip, perhaps they’re telling a riddle or maybe even organising an arranged marriage for their kids. Either way, it’s pretty annoying if you’re behind them. 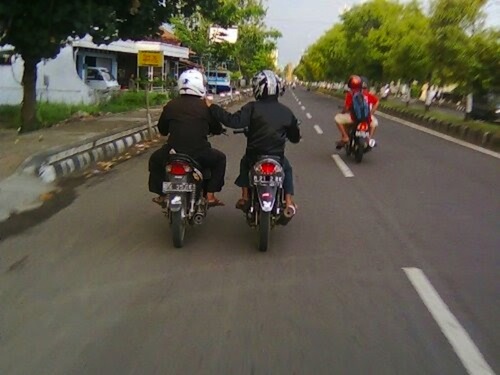 We don’t discriminate in Indonesia. A truck can sit at 40km/h in the fast lane on the toll road if he wants. I mean it depends on how one defines ‘fast’, it could be the fastest speed the truck can actually go, so in the truck’s eyes, he’s in the right lane, right? 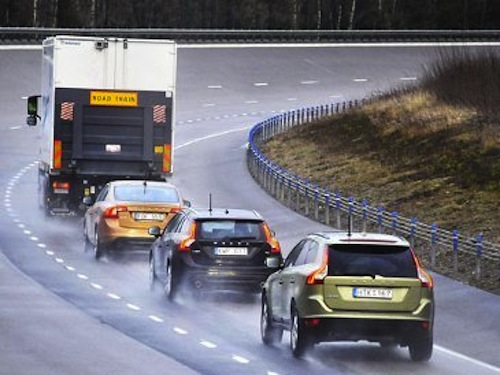 Despite the crazy way we drive, the poor conditions of the road and just the general risk of not wearing a helmet on a motorbike, somehow we don’t find the need to wear one. I guess we’re so ‘hard-headed’ we don’t think they’re necessary.

Again, the cops don’t seem to think they are necessary either. 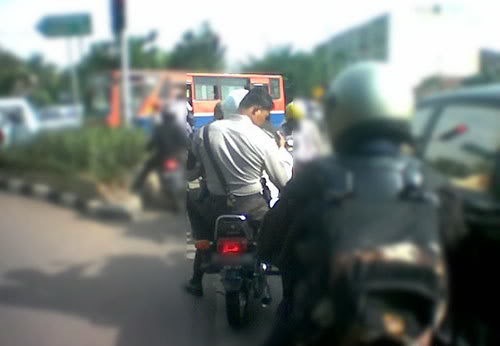 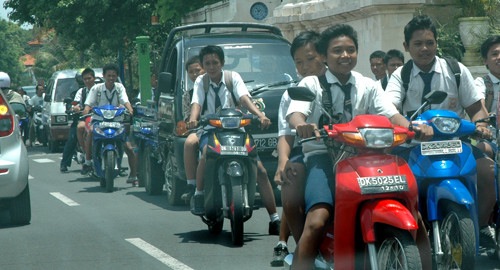 Some of us know what the yellow box is there for – an indication of where you are not allowed to stop, as it will block the flow of traffic,- but it seems that the yellow box has been reduced to ‘street art’ or ‘graffiti’ on the Indonesian roads. 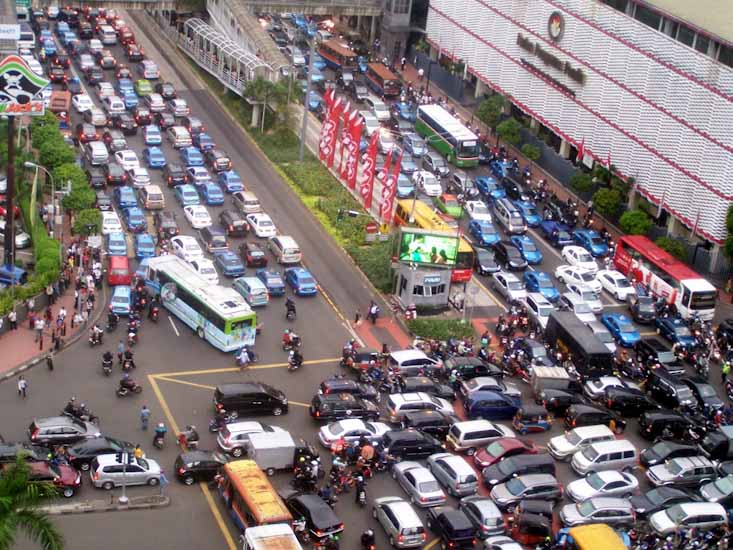 14) No Brake Lights and Headlights

Again, similar to the non-use of helmets, we seem to find brake lights and headlights just as unnecessary to our livelihoods. We are a superstitious people, prone to special abilities or the ‘sixth sense’, maybe we’re all good at seeing in the dark too? 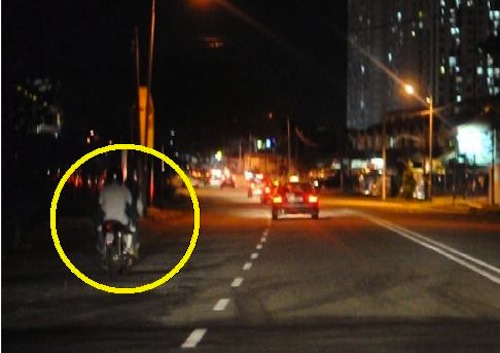 One may get stopped at random by an officer of the law and be asked to support their ‘Yayasan’ for policemen who are currently broke. 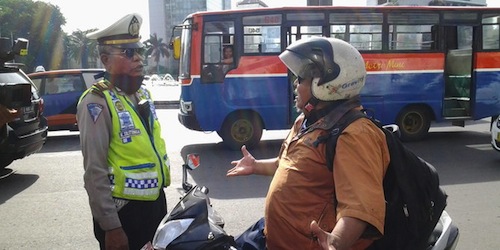 At times, Indonesian roads may be an inconvenience, so its no surprise when sidewalks, footbridges, perhaps even a river becomes an impromptu route. 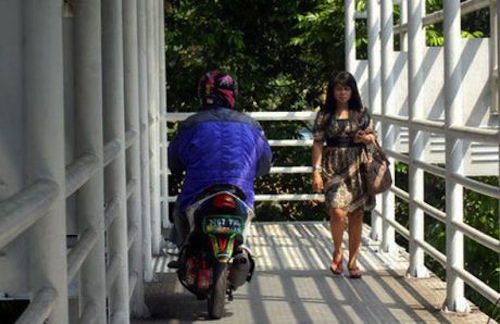 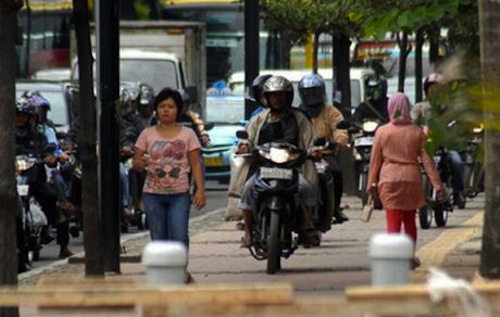 17) Emergency Vehicles Have No Power

Those flashing lights, that whining siren, those are all signs for motor vehicles to quickly move and get out of the way so that they can pass to their emergency destination. Here? You can wait like everybody else! 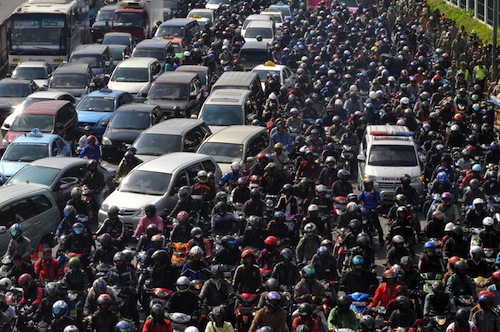 In Indonesia, the traffic lights have a completely different meaning… 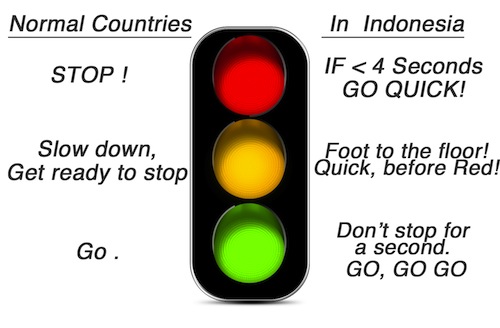 It’s probably more accurate to call them fire ants, in fact, because as a single unit they are nothing, but together they are a force to be reckoned with! Indonesia’s roads are ruled by the many motorbikes winding and weaving through the traffic, dictating how much a headache the rest of us have will have as a result. 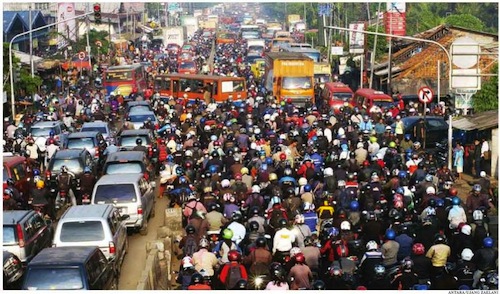 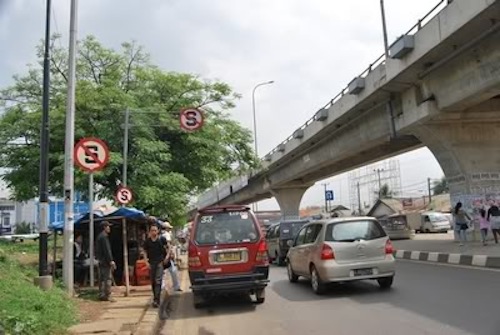 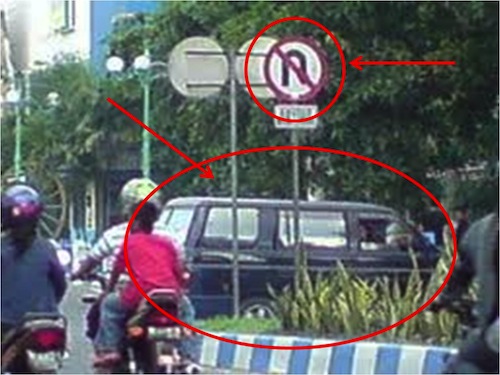 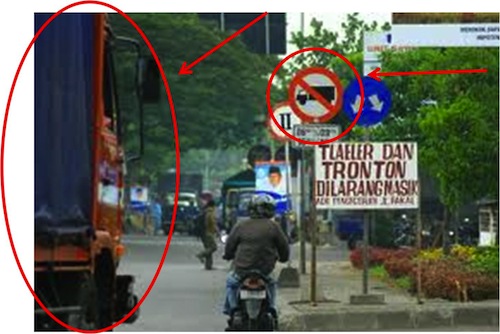 Yep, this is another common sight on the Indonesian roads. Using the boys in blue to get to your dinner date on time is no mean feat! 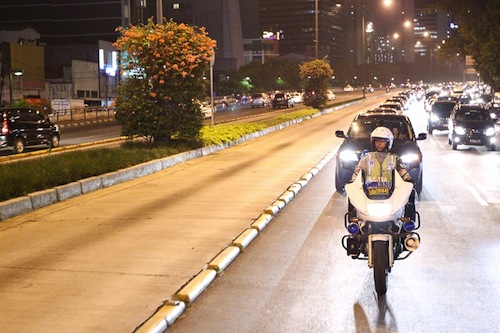 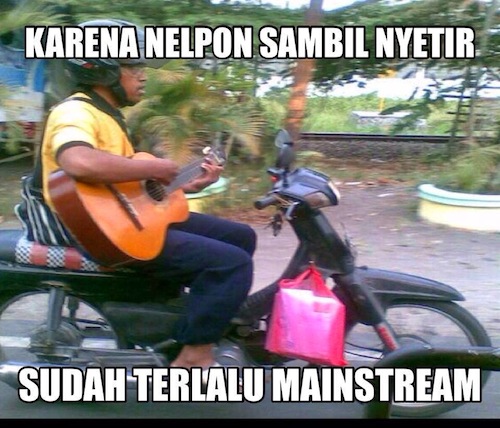