The 212 Reunion rally was held on Sunday, 2nd December, to commemorate the original anti-Ahok protest in 2016.

The 3rd rally of its kind was organised by Islamist groups and political opposition, known as the 212 movement – a symbolic anti-government movement.

It’s seen itself evolve from a “moral” movement to a formidable political force.

(Imagine the Tea Party Movement in America but with less bible and more koran.)

With 5 months to go until the next election in Indonesia, there was a lot to learn from the Sunday rally… And not just that Ahok must have almost served his 2 year sentence.

Here are 12 things we learnt after the 212 Alumni rally… 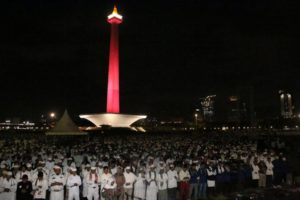 Everyone Got The White Garb Memo 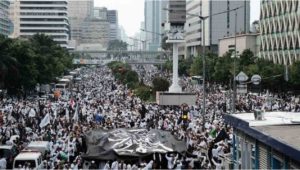 Rally’s were staged across Indonesia, for those who couldn’t make it to Jakarta. Thousands gathered in Medan. Similar numbers were seen in Asahan, Langkat and Deli Serdang regencies as well as Binjai city. 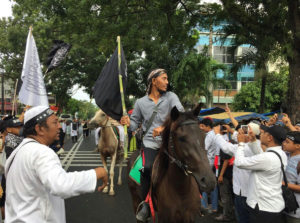 “According to information from the media who used their drones, there could be 8 to 10 million people in attendance.”

He failed to mention which media outlets can’t count properly. 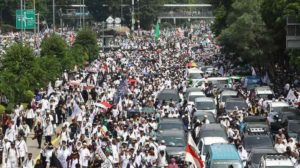 Whatever the real number is, it’s clear that the entire Jakarta population wasn’t gathered at Monas on Sunday.

Trump-like miscounting appears to be a 212 tradition. As for the original 2016 protest, the organizers placed the attendance at 7 million. In fact, the number was closer to 500,000.

200 Tons Of Trash Were Collected

Annies, the man who replaced Ahok as governor, stated:

“It is estimated that there are 200 tons of garbage that have been cleared. This is much smaller than New Year’s Eve. The amount of mass (attendees) is more than the new year, but the waste is less.” 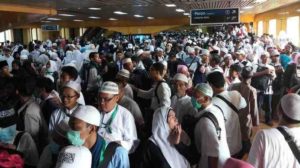 Are the people of Jakarta becoming more waste-conscious?

(If so, this is the real story here!)

Jokowi Was Not Invited

According to tempo, event organisers didn’t invite Jokowi because he:

“was seen as opposing the rally and tried to incriminate clerics.”

Though as Tempo also reported, according to University of Indonesia’s intelligence studies researcher Ridlwan Habib:

“The continuity of the reunion shows that the Jokowi administration is pro-Islam. An event with that magnitude was able to be held because the security personnel was also there to assist.”

Supporting, even when he’s not invited to the party! 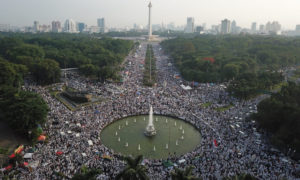 Prabowo Speech – Talks About How He Can’t Speak

Though one VIP who was invited was opposition candidate Prabowo, who’s swift speech was about… not being able to speak.

“I won’t speak long, because as you all know… as a presidential candidate, I must obey and follow all the regulations. I cannot talk politics, I cannot do any campaigning, yet. So, I just want to thank the organizers for inviting me today.” 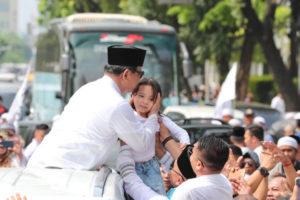 “During the 2019 elections, it is haram [forbidden] for us to vote for presidential and legislative candidates backed by parties supporting the blasphemer.” 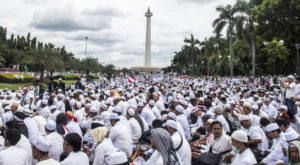 He also took the time to call for a calm rally:

Support for the movement has cooled since 2016. Perhaps it peaked too early, with the precipice being reached after the jailing of Ahok.

But it’s still a visibly mobilised and active force. Definitely one to be reckoned with in the run up to April 2019.

Some Protests Are More Equal Than Others

This should be seen as a successful protest.

Peaceful citizens enacting their right to protest, with no violence and no arrests.

It truly is democracy in action.

But compare the authorities response to the 212 rally and the Papuan Independence Movement protests that erupted around Indonesia the day before, 1st December.

537 Papuan’s were arrested in total.

East Javan Police claim it was for “their own protection.” 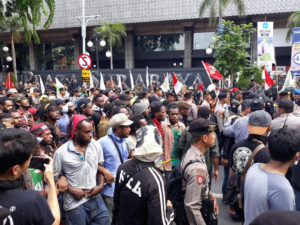 The peaceful, if lively, 212 Reunion rally is proof of Indonesia’s mature democracy, and an example for the world.

But we can’t pick and choose who we listen to in the vast archipelago. 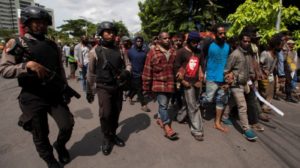 Unity in Diversity is the mantra.

We can continue to grow as a beacon of democracy for the world in the near and distant future.